Read The Beginning After The End online 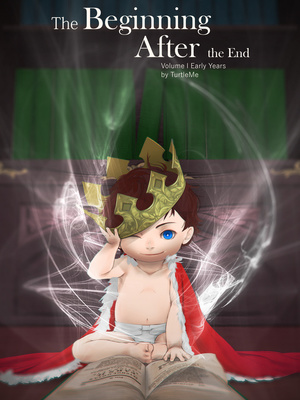 The Beginning After The End

"The Continent of Dicathen comprises three major Kingdoms: The Forest Kingdom of Elenoir in the North, The Underground Kingdom of Darv nearing the southern border, and The Kingdom of Sapin, located on the eastern border of the continent. There also exists the Beast Glades, of which a large percentile remains a mystery. Not much of the Beast Glades have been traversed due to the abundance of beasts hostile to travelers as well as each other. Yet, every year, countless expeditions have been made due to the tempting riches one could reap...…."

"....The Kingdom of Elenoir is the homeland of the Elf race, located deep in the Forest of Elshire where thick mist naturally forms deterring all but the elves, who, with their acute senses, can navigate freely…"

"...The Kingdom of Darv is a network of underground passages and enormous caves that can span up to several kilometers, whereupon the Dwarvin race reside."

"….The Kingdom of Sapin is easily the largest and most populated region in the continent. While this Kingdom is primarily composed of humans, there are also many merchants from the Dwarvin race, trading commodities of many..."

"…While the Beast Glades house countless monsters and creatures, they also contain wondrous treasures with long forgotten origins, obtainable by those who dare to seek them. There are records, written by adventurers and mercenaries, about dungeons and lairs of powerful entities that can make even the most generous priest into a greedy..."

"….Between the Forest of Elshire and the Kingdom of Sapin lies the Grand Mountain range which spans across roughly 90% of the continent, separating the North and East from the West and South ..."

"While the Kingdom of Darv and Sapin hold a symbiotic relationship for resources, the Elves seclude themselves and act aggressively towards every other..."

Closing the worn covers of what seemed to be an encyclopedia of this world, Arthur rubbed the bridge of his nose with his pudgy fingers, downcast, while emanating a gloom that was almost tangible. He let out an audible half-sigh that only seemed appropriate with his toothless mouth…

Hello! I go by the pen name, TurtleMe.

For both new and old readers, I just wanted to clarify why there are only two chapters available here.

As I have mentioned before, posting on here was a way to see how the novel will do on a platform with more competition. I've been greatly blessed by the supportive readers on here and I'd just like to say thank you!

The entire novel as well as the comic is still available on Tapas.io (website and app)