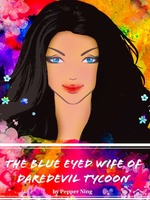 He expected her to either become nervous or explode in anger. But nothing he predicted happened.

But five minutes later, he found himself trembling infront of a ferocious girl with a bunch of knives in her hand. With a sinister smile planted on her lips, she looked like a professional knife thrower aiming at her target - his little brother.

Three years ago, at twenty, she came to Jing city for a fresh start, only to find that she walked straight to hell. She lost her only living relative - her mother.

Three years later, she managed to escape hell. While running away, she fell into the arms of an outrageously attractive man who changed her whole life forever.

Now it was her turn to destroy those venomous people who killed her mother. Before exacting vengeance, she decided to unveil the mystery behind her mother's death. She had to unlock the mystery surrounding her own identity.

Leng Weilin was a self–made entrepreneur, who spent years building his impressive, but formidable and fierce reputation in the business world. He was a ruthless business tycoon no one dares to offend and a man capable of doing the unthinkable.

Love was a weakness that he refused to succumb to. That was before he met headstrong and feisty Jin Zhilan.

When he first saw her, he found himself lost in her blue eyes. He was shaken to the core by the irresistible attraction that flared instantly inside his heart towards this feisty girl. He wanted to counter his feelings for her, but he couldn't resist the fire in her eyes and determination in her words.

The risk of losing this extremely alluring girl stared him in the face. He couldn't stand the thought of losing the person who lit up his world, at no matter what the cost. A passionate possessiveness for her, drove him to an imprudent and impulsive decision: a marriage to protect her! A marriage to tie her to him! Hence the ultimate bachelor decided to take a bride.