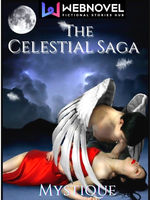 The Celestial Saga : "The Awakening"

After the mysterious death of her parents seven years ago, Katherine Grayson had always felt a presence haunting her. Her life was normal and mundane like every other teenager until a series of unrealistic events along with the arrival of Lucas and Zach in school, two brothers, who seem to have secrets up their sleeves. While, Katherine's best friend, Cecelia Parker develops an inclination towards the charming and amiable Zach, Katherine finds Lucas enigmatic and dark which piques her curiosity and she is inexplicably drawn to him.

Meanwhile, she meets Finn Marshall, who claims to be an old friend of her mother, and learns a secret about her parents past. Following this discovery, the truth about her true identity begins to unfold and she finds herself stuck in between a centuries old battle between the good and the evil.