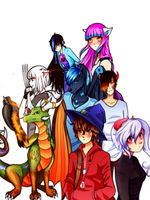 The Grand Knights are an organization that guarded the world and protected it from War. They worked behind the scenes, and only a few people know about them. One day the dark elves army got bigger and it kept growing. The dark elf lord wanted to gain power and money, so he planned to destroy the grand knights or even split them away from each other as they didn't have any power except for teamwork. His plan worked and the Grand knights are separated until this day. Only two Grand Knights died. Two siblings whose father was a Grand Knight plan to become grand knights themselves and regroup the Grand knights together. One of them was James he had Brown hair, hazel eyes, and bright skin. He inherited everything from his father apart from his power, he had the powers of a mage like his mother. His sister Lucy inherited features from her mother, but also apart from her powers. She had blue eyes, black hair with blue highlights, and clear skin. She had the power of blue fire which she inherited from her father. These two plan to stop, the upcoming War. The Darl Elf-lord planned to take over three of the strongest cities. Will they be able to gather all the Grand Knights in time or will they fail.