/ Fantasy Romance / The Half-Elf and the Half-Demon Werewolf 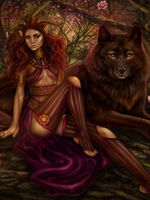 The Half-Elf and the Half-Demon Werewolf

Callista Royal
Callista is a 19-year-old girl who has just graduated from high school. She loves to read, write, and play video games. She is very shy and doesn’t have many friends but once you get to know her, there is a whole different side to her. She was bullied when she was younger, and it led to her having many secrets that she would like to keep hidden. She lives with her mother and a small dog, Pixie. She wants to go to college but doesn’t want to leave her mother by herself. What she doesn’t know is that someone has been waiting for her for a very long time and just may give her an excuse to stay home.

Dustin Anderson
Dustin is a 19-year-old boy who has also just graduated from high school. Dustin was more of the chill popular guy. He’s very intelligent and believes in treating women with the utmost respect. He is also a werewolf but has a bit of demon in him due to an accident. He’s 6’5, has black hair and hazel eyes. He is to be the next alpha of his pack and is looking for his mate. After celebrating his 19th birthday, he catches this most magnificent smell. It was a mix of strawberries and morning dew. What he wasn’t expecting was for it to be the quiet girl from his AP math class.

What happens when the two of them meet after Callista finds herself in a dire situation while on a nightly walk in the woods?
Will Dustin's secret be revealed? Will Callista except him for who/what he is? Or will she try to push him away because she doesn’t want to get hurt again?

It’s up to the Moon Goddess….