The Hunter and The Beast - Fantasy Romance

/ Fantasy Romance / The Hunter and The Beast 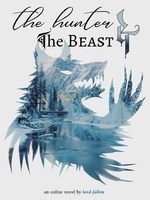 The Hunter and The Beast TH&TB

Millennia ago, a curse was cast over the greediest of mankind, turning them to were-beasts, who reveal their true bestial nature at the moon’s peak. For centuries, kingdoms have trained Hunters to eradicate these beasts, which have no place on their lands.

In the Northern Kingdom, a new Hunter has risen; young and yet to earn his title, he is the Chief’s son. One day, in the depths of a dark forest, he meets a man that piques his interest in more ways than one. Captivated by the man's dominance and undeniable allure, the young hunter slowly finds himself surrendering to his temptation... However, unbeknownst to him, that man is a leader of a were-beast pack residing nearby. While other packs seek forgiveness, his is one to which cunning comes as second nature. Cruelty first.

WARNING: R-18 | M/M
Contains mature themes, including but not limited to violence and dub-con.