The Legend of Black Eyes - Fantasy

/ Fantasy / The Legend of Black Eyes 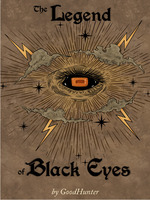 The Legend of Black Eyes TLBE

Planet Hera, shunned by the gods, suffers from constant wars.

Bandits lurk in the shadows, ready to ambush the weak and defenceless.

Zedd Darkstar has lost everything, his family, his beloved, and even his own identity.

He cheated death only to have legendary mages and powerful deities chase after him.

They threw him in Nowhere, a place neither here nor there.
Nothing existed in the abyss. Even time had no effect in Nowhere.

Just as Zedd thought he’d spend an eternity surrounded by the everlasting darkness, a magnificent creature appeared before him.

There is magic in the world, but it's dictated by rules that you get to explore during the story.
There are no levels or infinite grinding. The story focuses more on the MC using his head, and the powers available to him, to get out of tough situations.

This is a work of fiction. Names, characters, businesses, places, events, locales, and incidents are either the products of the author’s imagination or used in a fictitious manner. Any resemblance to actual persons, living or dead, or actual events is purely coincidental.