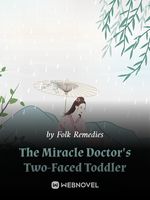 After being hit by a flower pot, Yu Wan woke up as a poor village girl with an unconscious and fragile mother and a little brother.
She was lost as she did not know this unknown ancient world. But she had to pull herself together, because her mother is still unconscious and her brother was starving.
So she plowed and sowed until she had a large piece of fertile land, rising to the peak of success ever since.
Just as life was getting comfortable, a man, widely feared and rumored to be a living Satan, forced his way through her door, declaring he would marry her!
Although she adored beautiful men, it was rumored that this prince…
“Your Grace, we don’t know each other well!” She said seriously.
“Heh!” The prince smiled meaningfully before grabbing three little toddlers with chubby cheeks from behind of him. “Greet your mother.”
Yu Wan was flabbergasted…