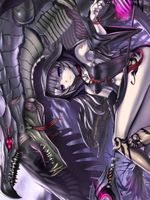 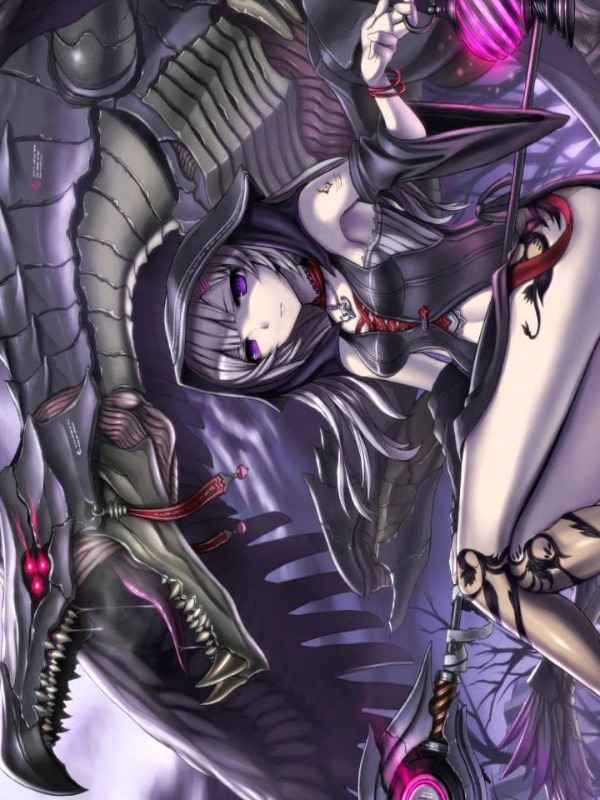 A beautiful woman with skin that is white as jade, purple eyes, and a voluptuous figure lays on the ground looking up at the night sky. This wouldn't be that strange if not for the corpses, burning fires, and undead ripping apart a group of men. Soon a small black creature bows before the woman.

"My lady, we have killed the slave traders and freed their captive what should we do?"

The woman looks over at the creature. It wears a beautiful black and yellow armor with a set of blades on its waist. It is about as tall as an 8 or 9-year-old child. If not for its black skin, pointed teeth, red eyes and long ears it from the distance it would look like a child.

"Gather the others right now. I want to go home soon."

Not long after a few more terrifying figures stand and kneel in front of the woman. At the front is a huge dragon with black feathered wings, 6 purple eyes, purple metal like scales, and a mouth tipped with a razor-sharp beak and teeth dripping purple fluid. Behind the dragon is a large 6-meter tall Death Knight covered in black and red armor. At its side is a tower shield as tall as him and a sword plunged into the ground in front of it as it kneels. Its face is all bone giving a bright glimmer like metal.

Beside it is an ethereal form of a man clothed in a beautiful black kimono. He would look like a handsome eastern man in his twenties if not for the left side of his body being all decayed. Next to him was a skeleton dressed in a dark purple rode that seems knitted for a king covered with gold and precious gems. Its fingers covered in rings that continually exclude an aura of death Its eyes are full red glowing fires. In its hand lies a staff

The last two are the previous swift undead goblin ninja. The last creature is a man covered in the head too tow with completely blood-red plate armor. He is 3 meters tall and holds a large black claymore engraved with imagines of skulls and blades.

They all in unison shout

"We wait for your orders, my lady."

She gets her self up and dusts herself self and her eyes show a tint of care which she hides very quickly.

"Good work everyone, I assume no one gained anything from this am I right."

The skeletal overlord than speaks

"My lady these foes were less than ants that shouldn't even have the right to gaze at your beauty.

"Arius am I that beautiful. I always thought I looked sad and depressing." As she touches her face and sighs.

"My lady your beauty is like an oasis that brings joy to my long cold and dead heart. Please see yourself for the beauty you are my lady."

The woman has been confessed too multiple times by men wherever she goes, but she always felt disgusted by their lies. However when her undead tells her that it brings a smile to her usually frowning face.

Arius and the rest of her undead followers notice her smile and it warms them to see the master they hold, so dear show an expression other than her usual frown and glare. The woman takes a deep breath and decided its time to go back to work.

"Everyone stand we are returning to the Lavara city. I decided to take a vacation, but the other guys are pressuring me to return to active duty. But its so boring I don't wanna go back."

The woman falls on the floor and begins trying to fall back asleep. However, her undead servants refuse to give her the time to be lazy. The giant Death Knight comes up and grabs her and puts her on his shoulder. Its voice is deep and cold as if an abyss released its cold enticement.

"I'm sorry my lady, but knowing your personality you would use every excuse available to delay our trip, so I will carry you and I won't put you down."

"Ajeesh PUT ME DOWN NOW!" The woman begins to protest and slam her fists on the back of the Death Knight.

"My lady you are being very unreasonable. Until we make it back to the city I will not put you down."

She begins to plead.

"Please put me down I promise I will behave, so pleases put me down."

When she shows her big puppy dog eyes he is very tempted to put her down. However how many years has he fallen for the same trick his mistress has played on him.

"No can do. The moment I put you down you will run away and it will take us days to find you, so just sit back and relax."

He and the rest of her servants begin the march to the city. while their master whines and complains. Knowing she will not be let go she decided to check her status.

I am old and all I wanted was a few years of sleep. Is that too much to ask. The others, however, the other will not let me hear the end of it.

As the first and strongest necromancer she and the outher first of their respective classes have to meet up every few years to keep a very sketchy peace. She as dark and evil person isn't very liked by the others not that she cares.

Just a few hours of travel full of complaints and begging they arrive at the agreed meeting place.

A city that was founded on top of the strongest Abysal dungean. A dungean that to this day has not been cleared. The latest floor explores it's the 523 floor. A neutral place that allows all species regardless of race, affiliation.

At the gates when everyone sees the gathering of horrifying undead and a pale skinned beauty in the arm of the biggest one they all run in panick... or not.

This isn't the first time she pases by but the weaker adventurers and weak willed peaple and commoners do panic.

The guards and most strong adventures give her respect and space as they recognize her. One young guard nudged anouther young female guard as he is too scared to approach. The rest do the same as she begins to tear up but they do not give her the option to refuse. Resigned to her fate she approaches.

Her face full of tears, shaking and stuttering she approaches the towering Death knight as its Aura Of Deapair at lv X make it nearly impossible to keep a good state.

"Exx cus me mmmiss ca caa can I asssk fffoor youur aaadddverures bbbage." She feels if she has to stay any longer she will go mad.

Our bored necromancer throws her badge at the girl. The girl fumbles to grab it and accidentally bumps into the tower shield of the knight and feels like she just saw her own death. Her face pales and she drops to her knees crying. The necromancers undead look at the girl and feel strange. Are they so bad she has to cry. The necromancer jumps off her Knight's shoulder and hugs the poor girl. She said nothing and mearly undoes the curse she fell under as even just touching a artifact of the Death Knights shield level can be fatal for a mortal. The girl recovered and apologised for the trouble. She scans the badges and runs back to the outher guards. The gate is opened and the Necromacer jumps back on her knights shoulder and they enter the city.

'I have to meet all those idiots again. I wish they would just leave me alone. Full of grievance and helplessness she accepts her boring fate. A long borring meeting.

Yes, this is just an idea I got on the spot. It annoys me as the tags are very misleading. There will be no romance at least for the moment. I'm doing this for fun. The stats and skills will come later. It kind of complicated.