Ch1: Assassins in the dark - the pantheons of chaos - Chapter 1 by honeynbeans full book limited free 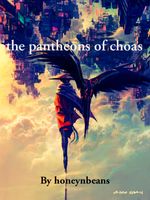 the pantheons of chaos

Chapter 1: Ch1: Assassins in the dark

The darkwoods were a vast, fascinating natural wonder.

A forest that was as vast as the Damar and Salmin empire combined, lush and vibrant all year round, filled with life and beasts of all kinds.

To many, it was a forbidden land that they should never lay foot in, after all it was home to terrifying monsters capable of toppling cities with ease, and in it danger was the main theme in every crany and corner.

But that wasn't the case for hundreds of mercenary guilds and adventurers who travel the depths of these deathly lands in search of riches and glory.

Be it demonic or orthodox, all capable warriors would folk at the thought of all the resources these lands hold, and among the hundreds that go in, less than a dozen see the light of tomorrow, and less than half of those will really leave with anything worthwhile.

At the outskirts of the lush darkwoods forest stood a city of the Damar empire, it was a city of riches and wonders, the Leaflow city, home to great markets and guilds, and of most importance, in its heart stood one of the many sectors of the ancestral paladin's legacies academy.

The symbol of the righteous path's unity and power ,and the birthplace of many great heroes and legends.

Every youth of the many empires that follow the orthodox league, would do anything for a chance to get admitted to one of these schools, but it was easier said than done.

The requirements in Talent were outrageous ,among the thousands of entries that they get every year, less than a dozen would make it in.

Such harsh requirements made the ancestral schools an example of a fantasy or a dream to most citizens of the orthodox lands, especially the commoners and those of simple origin, to them it was like the leap that would change a fish to a soaring dragon.

However, even though that is the case to most citizens of the rightious order, there was exceptions, and while the paladin school is the gateway to a fantasy-like life of adventure and power to many, for Aric Damar, it was probably his only chance to live a peaceful and sane life.

Yet as fate has it, even that wasn't going to be given easily.

On this fateful day, the skies were rolling in heavy dark clouds, after a long drought season, the rain months had finally arrived and the farmers and villages all around Leaflow city were burning incense and putting up lanterns, getting ready to celebrate the arrival of the God-given rain and sacrifice to the lords watching over them tribute to thank for their benevolence and to ask for a fruitful season of crops.

All around Leaflow city, hundreds of stalls and candy shops stood selling all sorts of traditional foods and beverages to the citizens of the city, celebrating the great occasion.

The smell of spices in the damp weather created a warm and cozy feeling, the children were playing and jumping around the stalls and streets filling the city with a cheerful atmosphere that was rarely seen within a city this close to a forbidden land.

It was a happy occasion and the inhabitants of the city were making full use of this day to release the pent-up stress that the drought left them with, and get ready for a new year of hard work and discipline.

And while the people within Leaflow city were enjoying the warmth and safety of the city walls, not too far from the high castle and within the tranches of the darkwoods, a young 16 or so teenage boy was running through the forests and trees, with all the power and strength his legs could produce, running for his life.

His robe was red from the excessive bleeding, and so was his once brown hair.

His body was riddled in punctures and throwing knives that were still stuck to his body, each Penetrating a pressure point making every breath the boy inhaled feel like molten steel pouring down his lungs.

It was a wonder how the boy was still standing on his feet, and the fact that he was running the way he did was proof of a strong will to survive, the kind you wouldn't find even in the most experienced of soldiers and paladins.

This boy was Aric Damar, the bastard son of the Damar emperor.

in the woods behind him, a pair of shadows followed closely in pursuit, the shadows were a pair of assassins, not the first that came for Aric's life, but the strongest for sure.

He knew why they were trying to kill him, and he could bet it was one of his father's concubines that paid them to take his life, yet to go this far to kill a mortal kid, those women were truly a bunch of bloodthirsty maniacs.

It wasn't like he stood a chance in the fight over the throne, nor did he have the desire to get involved in the ordeal to begin with , his whole life he was tormented for being an illegitimate son in the royal house, for beering "dirty" blood as they put it, and he only desired for that to stop.

Aric's life had always been a nightmare, he was tortured from a young age, and all he wanted now was to be treated like a human and be left alone in peace.

He used his royal blood token to join the Leaflow school, and all he craved now was to grow stronger , to one day be recognized as a royal blood and to finally have the chance to visit his mother's grave with his head held high.

Yet it seemes his brothers were having none of that and they sent assassins to intercept him on his way to the academy and end his life.

The assassins were so powerful they killed everyone in his entourage in the matter of seconds , every move they made carried a devastating pressure and they're attacks were so powerful and Swift they cut the mercenaries accompanying him like a hot knife cutting through butter, this kind of strength wasn't that of a mortal, these were paladins ,and strong ones at that.

Aric realized his life was clearly at its end, and he felt empty and hollow; he just thought of how humorous it was, considering the amount of money these women must've paid to recruit these assassins , it would've been enough to bribe him to kill himself, and he'll even take a while before he'll decline.

Aric looked at the raging storms over his head and the heavy wounds covering his body and bitterness drowned his heart.

" I just wanted peace... I never cared for their dumb royal house, why won't they leave me alone.." with this thought crackling at his psychic, Aric Discovered a clearing not far in the forest infront of him and started running towards it, hoping to maybe find a patrol or something, anything that could keep him alive.

The assassins behind him didn't seem to be in a hurry and were slowly catching up to him, they were experts capable of speeding up to Aric in a breath if they went all out.

But such a use of essence is something paladins would be very sensitive towards, and if they brought the attention of the academy's experts, they'd be dead in a flinch, thus they chose such a slow approach rather than risking their lives to catch a half-dead pray just a tad bit faster.

Aric ran and ran, and when he made it to the clearing, he felt a strong and powerful momentum slam into his back, cracked his spine and shot him rolling in the dirt.

The power was that of a knife that hit his lower back and was barely stopped by the soft armor he was wearing.

Aric rolled in the dirt for a while only to be stopped by slamming into a massive black statue of a warlord, he slammed into it so hard , he spat a mouthful of blood and lied unmoving at its base.

" A good choice for a burial ground, if I may say ..." A cold and shallow voice rang from the forest, before two shadows slowly emerged from the darkness and walked towards Aric.

Aric used the wooden staff tied on his back to probe himself on the dark stone statue behind him, and pointed it at the pair of assassins coming towards him, he didn't think that he stood a chance against them but he wasn't willing to die without a fight.

The pair of assassins looked at him with ridicule , then the taller among them walked forward with a knife in his hand and said " I didn't know of a cemetery standing in the heart of these woods, yet you made it all the way here on your own , I guess it's your fate to die here."

Aric finally looked around to realize the clearing in the woods was a cemetery and as ironic as that might be, Aric wasn't in the mood to laugh at his sick luck.

" Why..?" A cold and weak voice escaped Aric's lips, and his cold eyes were glued to every move the assassin made, ready to retaliate in the most violent of ways, he clenched the seven feet, long redwood staff in his arms, and held his stance with every ounce of strength left within him.

As for the assassin, hearing Aric's question he seemed amused, "why you say ?" the assassin smiled comically under the veil covering his face "well I did it for money of course! "

Aric heard those words and didn't seem surprised, why else would an assassin want him dead, to be honest, he desired for there to be another motive, a grudge or hatred to make the bitter taste in his heart sweeter, but there clearly was none, so he thought to hell with it all, it was bound to happen sooner or later anyways.

After saying his words, the black-robed assassin launched himself at top speed and struck his knife towards Aric's heart.

Aric raised his staff and launched it forward with all power left within him in retaliation but to no Avail.

The dark steel knife, backed by the power of a master, sliced through Aric's staff like butter and Pierced his Heart and nailed him to the statue behind.

that was the difference between a mortal and a paladin, a chasm no amount of skill could surpass.

The assassin looked Aric in the eyes and said, " no need to fight the unavoidable kid, at least you can rest in peace now. "

" Oh fuck off…" Aric said those words in a harch voice, stretching his hand and putting his middle finger in the assassin's face, uncaring for the concept of final words.

but that nevertheless was irrelevant now, the assassin's knife crushed the boy's main pressure point, standing in the center of his heart and even a heavenly doctor couldn't save him now.

The assassin sighed and turned around and left Aric to die in peace, he and his partner disappeared into the woods while the boy was taking his last breaths.

" Is this it... Is this the end" as much as he hated to admit it , it seemed that to Aric that his life has come to an end, and all that was left within was emptiness, and the thought that a joint of red bloom flowers would've been a pleasure to smoke right now.

Hope you enjoyed this chapter, if you find any mistakes or faults, please comment down below, and have a nice day.