/ Fantasy / The Retribution of a Cursed Swordsman 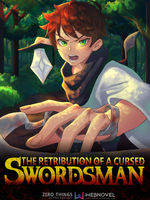 The Retribution of a Cursed Swordsman TROACS

War struck the whole continent as the emperor of a nation filled with hungry beasts vowed to destroy humanity.

It seemed as though there wasn’t an end in sight to the mindless violence between the two nations until a group of people stood out from the rest of the humans to bring the constant fighting to a standstill.

The humans praised them for their efforts, and the beasts hated them for interfering in their war. Yet, there was nothing any of them could do to go against the power that they held.

Kalon Talvos was the illegitimate prince of an empire which was known for its strength and vicious brutality. Yet, he didn’t have a shred of that within him. At least on the surface.

The young prince lived his life without hatred and was oblivious to the dark forces moving behind his back until an encounter with a strange man changed his life forever.

“There isn’t much time left. Trust in only yourself. Only you know the truth. Now reach out and bring this all to an end.”

“Then let me take over for a while. I can take the pain away.”