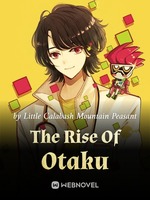 The Rise Of Otaku

Zhou Yu was not a good son. After graduation, he just stayed inside the house every day and refused to go out. He didn't want to look for a job nor did he want to look for a girlfriend. He was just as hopeless as could be. This gave Zhou Yu's parents a lot of headaches. They had used all kinds of methods they could think of, however, even when the relationship between them had reached the breaking point, Zhou Yu still didn't want to move an inch.

It was not that Zhou Yu didn't know any better, he just didn't like to work outside of his house. If he ran out of money, he would simply write some novels online. Although it never made him rich, only a few bucks that could almost count as none, he was not a drinker or smoker, plus he never went out, he didn't really need money. In terms of the rest of his time, he mostly spent on anime, comics, and games(ACG).

Therefore, saying Zhou Yu was an otaku, there would not be any objections.

There was a famous short story writer in the Zhou family who once said, "Secluded in my small attic, I'll enjoy my solitary state. Who cares if it's winter or summer? Who cares if it's autumn or spring?" This was the phrase that Zhou Yu liked the most. Since that famous senior also didn't object to this kind of lifestyle, as a junior, if he didn't properly carry on this fine tradition, it simply couldn't be justified.

However, if he carried on living like this, in the house that his parents also lived in, it would only make the relationship between them even worse. So in order to avoid making things worse, Zhou Yu decided to move to his hometown.

After all, since his grandparents moved to the city, there wasn't anyone living in his old house. It was exactly the peaceful environment he wanted.

Although this method was exactly like something that an ostrich would think of, as long as he doesn't need to give in and his relationship with his family doesn't get worse, it was fine with him.

Far away from the noisy city and having no one coming to annoy him, the village life was truly peaceful. Sleeping till noon, writing some chapters, and playing some games, days just passed away like that. The only problem was that during summertime, there would be power cuts occasionally. This made the internet-addict Zhou Yu very angry.

...Time flies, Zhou Yu already stayed in the village for a year...

Even Zhou Yu himself also found it kind of funny, that he had been living in the village for a year now, however, he still didn't get to know all of his neighbors. The only few people that he was kind of familiar with were those aunties that were selling the braised meat on the street. After all, he could stop talking to everyone, but he couldn't stop eating.

His everyday meals weren't that great, just some simple dishes, but it was enough for him. Just when he thought that he might live like this for the rest of his life, something unexpected happened in his life.

Waking up by the bright sunlight outside his window, it was going to be another wonderful day. Groping his glasses on the nightstand next to his bed, he was thinking about carrying on the unfinished in-game mission that he had left yesterday - leveling up his rank.

'If I try harder, I might be able to reach gold rank today,' he thought.

However, what he didn't expect was that after he put his glasses on, the drawing style of his world suddenly changed(1).

Yes. That's right, the drawing style was changed. What originally was the full 3D real world now changed to the realistic-ish anime. To put it this way, the world was still the same, but everything looked two dimensional.

Zhou Yu, who originally liked ACG world a lot, now began to act like Lord Ye, who claimed to love dragons, but was scared of dragons. He shouted in panic while throwing his glasses away. Fortunately, the glasses landed on his bed, otherwise, his loyal brother - the glasses, who had stayed with him for many years, would break into pieces.

Without his glasses, it was natural to find everything around him blurry, but everything was so real. The real bed, the real wall, even the instant noodles that he had not finished last night were so real, it just had some weird smell to it.

'Is it the problem with the glasses?'

He touched the glasses again hesitantly. But nothing special happened. The glasses didn't suddenly transform and turn into a Decepticon, trying to conquer the world. So he gathered his courage, picked them up, and squinted his eyes to gaze through the glasses from a distance.

As he expected, the other side of the glasses was indeed the ACG world.

While still puzzling, Zhou Yu took out a pair of backup glasses from his nightstand. However, after he put them on, what he saw was still the ACG world.

'This doesn't make any sense at all,' Zhou Yu was even more confused. The backup glasses were bought before he moved to the village. He's never worn them before. It shouldn't mutate.

Without the glasses, he was basically a disabled person, but wearing them meant that he had to deal with the strange world. It was truly a difficult decision.

Having thought it over and over again, eventually, he still couldn't bear the pain of not being able to see things and put the glasses on his face while having the thought - "This is my life now" in his mind.

Once he accepted "the new settling" of his life, he was no longer that scared.

Although he was shocked in the beginning, he didn't plan to change his lifestyle. After washing his face and brushing his teeth, the first thing he did was still to turn on his computer.

Luckily, the computer graphics were still the same as before. Maybe because it's graphics were already two-dimensional before, so it didn't change. As long as he could still play the game, he didn't mind it that much.

Typing the chapters, as usual, playing the games as usual… then his stomach started to make hungry noises.

Normally, he didn't eat breakfast, just some fruits such as two apples were more than enough for him. And when it was time for him to have the second meal, other families in the village were already preparing for their dinners. Looking inside the fridge, it was empty. It was time for him to buy some food.

The shop that sells the braised meat was the one that he went to the most often. The owner of the shop uncle Li attentively served this regular who didn't like to talk. "The same old three dishes?" He asked the same question as he usually did.

Every time Zhou Yu would order the same three dishes, roast duck, braised pork, and chicken wings. Uncle Li already remembered it. However, what he didn't know was that his look was completely different in the eyes of Zhou Yu now. If it hadn't been for the fact that Zhou Yu stared very hard through the gap of his glasses to confirm that he was uncle Li, he wouldn't even dare to answer this handsome but unshaved animated middle-aged character, who was currently holding a cigarette between his lips.

After getting the meat, he went to the market to get some vegetables, and then some snacks from a small convenience store. Eventually, he ended up having quite a big bag of food, it was enough for him to survive for several days.

On the way home, there was a small river, it had a great view. Every time when he walked past the river he would slow down, since it was very rare for him to get close to nature.

Especially since it was summer time now, many naughty kids like to come here and play with water. But very soon, one would see some adults chasing those kids around using wooden sticks. Those kids would often end up running away without having their pants on.

However, Zhou Yu didn't have that mood today, because, suddenly some bright red-colored texts appeared in front of him.

[There is a wild photographer in front, please decide the countermeasures]

There were two options below the message, one was to escape and the other was to fight.

'Fight? How? Fight who?' Zhou Yu raised his head in confusion. Then he saw a strange cat-like anime creature hopping towards him. It looked like a cat, but it was walking on two legs. Its hairs were mixed with a gray and white color. There was a cap on its head and an object similar to a camera on its shoulder.

This was a small village, the main purpose of keeping a cat was to catch rats, no one in the village would make some clothes for their cats, especially clothes like these.

Bowing his head down, Zhou Yu wanted to find out what the cat originally looked like, because the animated character would always be exaggerated. Otherwise, uncle Li would not become a handsome middle-aged man.

However, as he gazed through the gap of the glasses, there was nothing on the road!

Zhou Yu was startled. However, as he raised his head, he noticed that the animated creature was still "dancing" in front of him.

"What is this creature?!"

Because Zhou Yu didn't know what was going on, he didn't dare to make a move. After a while, the bright red text slowly disappeared with the strange creature...

Today was truly a marvelous day...

1. The drawing style of his world suddenly changed: Imagine the world you see is the 3D drawing, it suddenly turned into a Japanese anime. Everything around you looks cartoonish. That's what it means.