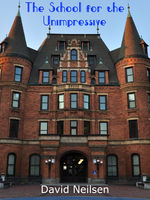 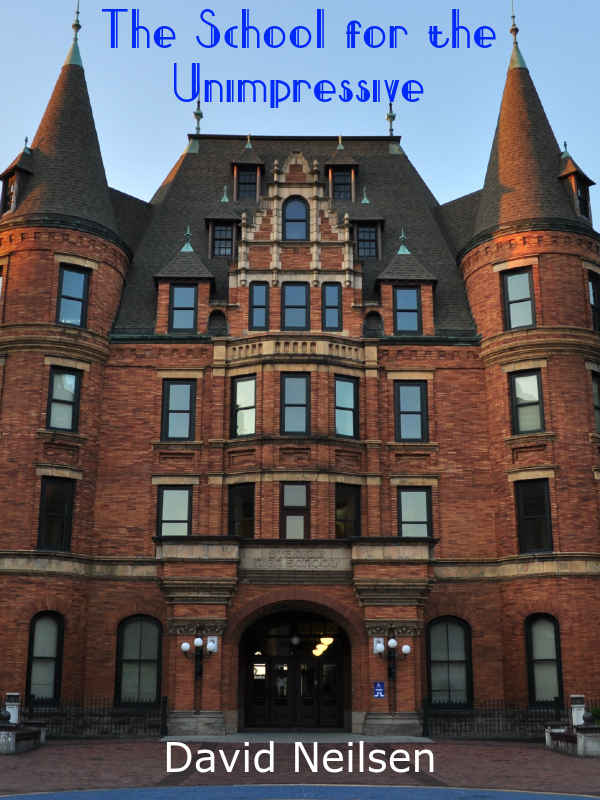 The School for the Unimpressive

Chapter 1: The Day Everything Changed

The day Gavin Mallard developed a superpower started out like any other.

He woke up, got out of bed, got dressed, ate breakfast, the usual. After finishing his bowl of Honey Nut Oat Blast Ring-a-Dings, he dropped his dishes into the sink, picked up his backpack, and headed off to school.

Gavin was a relatively normal kid, and if you saw him on the street, you wouldn't have noticed him unless he was wearing his bright green Forbidden Pastries t-shirt. But he didn't wear that very often because, well, it was bright green. Also, the band wasn't really all that popular. A bit short for his sixteen years of age, Gavin tended to blend into crowds, and when there weren't any crowds in which to lose himself, he would often blend in with the surrounding buildings or lampposts or the pavement. He had messy, brown hair and hazel eyes and walked with his feet turned out at an angle so he looked like he was waddling. He didn't have bulging muscles or a dancer's grace or a genius intellect or anything special. He was just Gavin. Inoffensive, forgettable Gavin. He had a couple of friends, had never dated a girl (or a boy), and liked to read adventure novels featuring characters who lived lives far more exciting than his would ever be.

And he certainly didn't have any superpowers.

Not yet, at least.

He wanted one, of course. What kid didn't? Children with superpowers got the best of everything. Their families moved into the best houses, they were given lots of attention and were fawned over by people, they became famous, and, of course, they got to go to Lord Thumbledown's School of Heroics. Gavin had seen pictures of the School of Heroics, and it looked way cooler than his own Brumblefeld High School.

But he was sixteen, which was old for suddenly gaining superpowers - most kids who got them were twelve or thirteen. Fourteen at the most. Still, Gavin had held out hope. The day before had been his sixteenth birthday, and he'd spent it trying to manifest something, anything that would make him special. He'd tried to lift the car, but hadn't gotten super strength. He'd run around in the back yard but hadn't been any faster than normal (and his asthma had kicked up). He'd floated around in the kitchen behind his mother to see if he was invisible, but she just told him to empty the dishwasher. He'd even jumped off the fence to see if he could fly.

He couldn't, and he had the scraped knee to prove it.

Eventually, he'd had to admit that he wasn't special. He wasn't one of THEM. The kids with superpowers. The Heros.

And so he walked to school the next day, head down, ready to go back to his boring, regular life of anonymity.

"Yo, Gav, you have a good birthday?" asked his one true friend, Ernie McWallister.

Gavin nodded. Ernie rolled his eyes. "Man, I thought you'd gotten that out of your system last year! Dude, you turned sixteen. Nobody gets a power at sixteen!"

Gavin sighed. "Forget it." Ernie meant well, Gavin knew, but he didn't understand. Nobody understood. Sure, the odds of any one child getting a superpower were tiny, but it happened. And for whatever reason, Gavin had always felt like it was going to happen to him. He'd read interviews with some of the kids at the School of Heroics, and they all talked about feeling special long before their superpower had appeared. Gavin figured since he felt the same way, it would happen to him.

Ernie joined Gavin in sighing in resignation. They both knew who had walked up behind them without their having to turn around and look.

"Go away? Is that any way to talk to someone who just wants to wish you a happy birthday?" Charles 'Badger' Williams placed a hand on each boys' shoulder and gently spun them around to face him. Gavin was unsurprised to see that he had his usual posse of wanna-be toughs bunched up behind him. "It is your birthday, isn't it? I remembered correctly, didn't I?"

Badger made a big show of gasping and holding his palm up to his mouth before responding. "Oh, no! You mean I missed it? I feel terrible!" He smirked and Gavin knew for a fact the kid hadn't gotten anything wrong.

Gavin and Badger had been friends back in elementary school, and each had been to the other's birthday parties numerous times before the age of ten. That, coupled with the fact that they both knew they shared the same birthdate (though different months) meant there was no way Badger had gotten anything wrong. He was just being a jerk.

"Are you sure?" pressed Badger. "I had a gift for you and everything."

Gavin seriously doubted Badger had bothered to get him a birthday gift. More likely, he'd found a pine cone in the field and was going to throw it at Gavin's head. "You don't need to give me a gift," insisted Gavin.

Badger glared at Ernie. "Who asked you?" Badger's posse giggled at his display of verbal wit.

Gavin sighed. He saw where this was going. Badger had come over with the sole intent of giving him something, quite possibly a kick in the shins or a punch in the face. Putting off the inevitable was futile. "Fine," he said. "What's your gift?"

Badger beamed. "A knuckle sandwich!" The bully reached back and slammed his fist into Gavin's face.

Gavin recoiled from the blow and tripped backward over his feet, landing hard on the ground. Pain swept through his body, a strange, warm pain that was unlike anything he'd ever felt before (and he'd been punched by Badger plenty of times). He felt a tingle start below his navel and spread throughout every extremity until it felt like he was shooting energy out of his fingers and toes. It was such an odd sensation, Gavin totally shut out the violent school bully, the deranged posse, and his only real friend. He concentrated instead on the pain, feeling it in his bones, his muscles, his tissues, his very cells.

Gavin, meanwhile, sat up. The others looked down at him and Badger sneered, "Happy birthday, Mallard!"

Nodding, Gavin stood. "Good one, Badger," he said, oddly calm. "Nice and original. I never would have expected you to punch me in the face."

His behavior was so not what Badger and the others were expecting, that the leader of the gang frowned. "You want another one?" he declared, not quite as forceful as earlier.

"If that's the best you got," answered Gavin, "then sure." He had no idea why he was being so bold. The truth was, he did not want to get punched again. He supposed he could try to fight back, but that would be less than pointless, particularly with Badger's buddies just waiting for a chance to get in on the fun. What he ought to do was run away. It's what Badger wanted him to do, it's what the others expected him to do.

"Best I got?" asked Badger, a bit taken aback by his victim's attitude. "No way, man. I was holding back. You want my best?"

Though he had just asked a question, Badger did not wait for an answer. Instead, he swung even harder and made an even more solid connection with Gavin's face. The punch caused Gavin to stumble back a step, but that was it. It was almost as if Badger had lightly pushed him rather than smacked him in the nose with the force of an iron mallet.

"Oh, come on, Badger. You can do better than that!" taunted Gavin. "You think you're tough? Beating me up like this?"

Everyone was staring at him, jaws hanging open in wonder.

"No way," said Badger. "No way. No way!" His cries grew in alarm and he backed away from Gavin and into the bulk of his posse, who, it should be noted, were equally freaked out. Confused, Gavin turned to Ernie, but his friend was just as gob-smacked.

"Your face!" said Ernie, finally. "Dude! It went all squishy!"

"All what?" Gavin reached up to touch his face, but it felt normal. He also noticed that his hand didn't come away wet with blood, which was a plus.

"Badger's fist sort of... squished into your face like it was a sponge or something. When he pulled his hand back, your face popped right back into shape. You've totally got a squishy face!"

Which is when Gavin Mallard discovered that he did, in fact, have a superpower.

Thank you for reading this far, and I hope you will dive into the rest of the story as I bring it all together. Please leave a review if you can, and any power stones or gifts or comments are always appreciated!