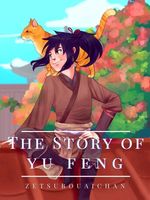 The Story of Yu Feng YuFeng

Yu Feng was a street thief with a reputation as 'the thief who has never gotten caught'. Until that one day...

Her capture threatened her to work for him. Her task? To carry messages and deliver them to each receiver—she became a runner.

The seventh prince, Prince Yi was fighting against time as they are trying to find evidence of the enemy trying to assassinate the Emperor. However, recently most of his messenger never reached their destination and this has caused them a huge loss. This was why he needed someone who knew the Capital City's streets and shortcuts to help him.

When Prince Yi found out his runner's identity, he was delighted! But once Yu Feng found out the identity of the man she was working for, she tried to escape.

“Yu Feng, you dare to run away from me. This Prince had caught you once. Believe me when I say that I will catch you again.”
---
This story is written to participate in WPC 137: Catch Me If You Can
---
Cover illustration: kirinlukis
---