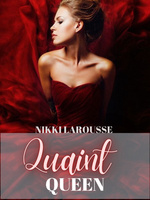 The Vampyre Venture [On Dreame] TVV

[This series has been moved to Dreame. Check them out there for the continuation of the series!]
On the Island of Niapachad, there are rumors and mystery that would bring you back in time as the inhabitants of this island is a blast from the past. They talk strangely, dress strange and the community is strange. They still acquaintance themselves with the old ways, having gentry as the social hierarchy. There is so much to learn and discover when you're here. The wonderstruck balls, the dazzling operas, and spectacular views from all over the island.
But beware, for you don't know what's lurking the shadows and something might be more than just a beautiful dream that you wanted.
*****
First, we have Duke of Belikov who was forced to find a bride to continue his lineage before he stumbled upon a Lady with a sassy mouth.
Second, we have Marquess of Kain who was pressured to continue his lineage when he discovered that his maid was not who she said she was.
Third, we have Count of Vyckos who was saving a tourist that was attacked by thieves, only she was not a tourist but a Lady in disguise.
Then, we have the Earl of Raine who was trying to impress a Lady that was finding everything in her life mundane.
Last but not least, we have Baron of Fell who befriends a Lady that was on vacation with her family and did not know who he was.
Will this be a beautiful dream for our heroines? Only time will tell when you lurk in the shadows of the world of creation of new series by your favorite author!