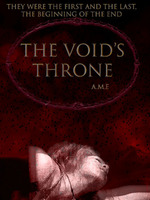 Birthed by Evil and Chaos and plagued with an immense amount of power, Trivask spent the majority of her exceedingly long life traveling between realms. Not only did she take on a new body and identity with each new life, but she also attached a piece of her soul to a mortal. They were to be her shields, her food, and her tie to their realm.

When she was done with them, all it usually took was a simple swipe of her finger, then they were dust, and she was up in the wind.

Then she met Alijah Hunts.

And he screwed everything up for her. He took more than he should have, and in doing so, he led evils far beyond his understanding right to Earth.

First came the void
And from that void, came the entire world
But tainted was a small corner
That evil birthed death and chaos
Energies potent and condensed
Bodies solid and not
They were the first and the last, they were everything and nothing, they were the beginning of the end