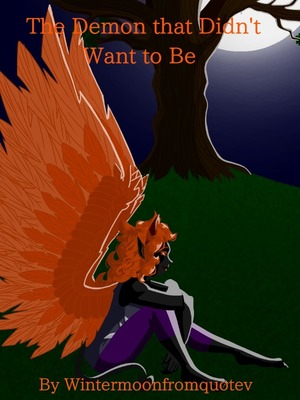 The Demon that Didn't Want to Be
A world of demons and angels has been at war for a thousand years. From this war came the walls around cities, the division between races, the abandonment of their gods, and the disappearance and suppression of magic. Angelica, a demon with the wings of an angel, was born into this world. Because of this hatred between races, her wings led to abuse and isolation. At the age of eighteen, she risks her life in running so that she might make a life of her own, away from the war and it's horrors. But what happens when she realizes she isn't the only wrong winged out there?

The Prison that Never Was:
Angelica didn't know how much regret one could feel until she left her mate to return home.
Yet, she'd had no choice.
To save her mother's life, she agreed to return to her city with her father. All too quickly, she realizes what a mistake she's made. Her parents can do nothing to protect her from her fiance, who she is set to marry in two weeks, should her mate not show.
But, as much as she loves him, she prays he doesn't show.
Damon has a choice.
Submit to breaking, but have Angelica by his side.
Forget his mate altogether and move on with his life.
He doesn't know which is worse, but he's willing to do whatever it takes to get her back, even if it means destroying himself to save her from a lifetime of suffering.
Neither knows what comes next. But they both know that they can't stay in this prison that never was.

The Crown that Was Never Meant to Be:
After escaping from Valorie's prison and meeting up with each other in the woods, the wrong winged have finally made it back to Averrok. But there's one problem. The demon king is not quite okay with their escape and is rallying an army against them. A spy in their midsts and and their own families set against them, the wrong winged quickly realize that they need help from an outside source, and Damon must take up his birthright as Crowned Prince of the Angels to save his friends.

The War that Was Unwilligly Wrought:
Averrok's era of peace is coming to an end. With the Demon king's ominous warning, Angelica knows she doesn't have long to prepare for the coming war, and, after a sighting of the Eleventh, she realizes she has much more to deal with than just the war. Even more, things shift downhill when it looks as if Romanulius's plan had been set into motion, and allies are lost and gained. With all of this forced onto Angelica's shoulders, she struggles to lead a nation into a war that was unwillingly wrought.