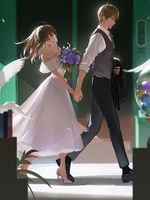 Joi Nolan a stiff, formal, straightforward man who doesn't have any interest in marriage slowly pulls to a girl whom he never dreams as his wife not even as his girlfriend.
She did all the part-time jobs care-giver, tutor, waiter, salesperson before she got a stable job in as a company. But as soon as she joined the company fate was playing at her.
************
Why are you so insisted to tell her? What's the problem? Nolan asked frowning deeply.
Because We are not dating in real. Levi shrugged.
But we show up as a couple. Nolan said.
Because We don't know that she will be your blind date. Levi replied.
Levi Let's not argue. I don't like this situation. Nolan said reaching out her hand.
Tell her, we are not dating. If you are not telling her, I will and I... Levi swallowed her remaining words when Nolan pulled by her nape and kissed her.