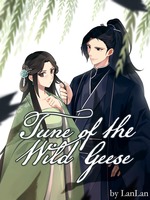 Tune of the Wild Geese TWG

Beautiful and clever Yan Qiu Yue is the treasured only daughter of Duke Ning’s household. Her family could not bear to part with her, so she has reached the ripe old age of 17 without even once hearing the word “marriage.”

The scheming emperor, uncaring of the Yan family’s bonds, decrees her betrothal to the only son of Prince Rui of the First Rank. This son is known across Eastern Wei for being a callous wastrel-in-training, but before Qiu Yue has time to mourn her lack of luck, shocking news reaches the capital: Prince Rui’s real heir was switched at birth and has since grown up in the Northern Xi territory! His return to the capital is met with much fanfare and curiosity.

To show some goodwill to this supposedly long-suffering Wei Tian Ao, the emperor allows a new interpretation of his betrothal decree so that he, the legitimate son of Prince Rui, may marry the noble Yan Qiu Yue! But why does Qiu Yue's new husband seem rather unhappy with this whole arrangement? The weeks after their wedding go by without her seeing even Wei Tian Ao's shadow. Might this turn out even worse for her than if she’d married that wastrel…?

“I trust no one in this city of schemers and murderers, least of all a wife whose character and family are unknown to me!”

“You are surprisingly eloquent for a northern barbarian, my lord.”

“If I never see you, I don't have to acknowledge that you exist…”

“Go ahead and hide if you dare! Even without you, I am still a noble princess heir apparent.”

** The cover art was commissioned from artist Huixci just for TWG and features Yan Qiu Yue and Wei Hong Sheng. **