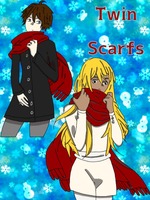 Twin Scarfs is a story of about a man and woman who go through similar struggles with their self-identify. They learn about each other and write it down in journals for the other to read. The two become deep indulged with both each other lives, learning all their greatness qualities and darkness secrets.

"Why are you apologizing?" Harper gazes down Shuu's shaking body, he reminded Harper of a kicked puppy who was left out in the rain.

"I'm sorry..." Shuu repeated himself, clinching both of his forearms.

Shuu squinted his eyes tightly, his breath began to become heavy and uneven. Shuu refused to stare at Harper in the eye.

Shuu suddenly felt a strike of stinging pain upon his head.

"Ow! That hurt!" Shuu whined, lifting his head with narrow brows towards Harper.

"Obviously... you wouldn't felt that if I were dead now would you?" Harper chuckled with cheeky smirk printed of her face.

Harper slide her hand underneath Shuu's chin, so he wouldn't turn his head away from Harper.

"However, if I did died and go to heaven. You know damn well! I would drag you up with me, even despite after all the sins you committed," Harper's smirked grew wider while the blush on Shuu's face grew into a deep red.