Under the Street Lights - Realistic Fiction

/ Realistic Fiction / Under the Street Lights 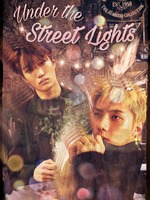 Under the Street Lights

I may be homeless, but I found a home with you.


The air condensed as it left his lips. Feet dug into the pure white snow as he put in every last bit of strength in him just to keep moving forward. The piercing, unforgiving cold numbed his hands and feet. Newspapers of the ongoing recession were scattered around on the empty street in bold headlines, almost as if the universe was taunting him. The way everything he had worked so hard for all those years was taken away within a single second, ripped apart as if it were nothing.

Muscles finally giving out, body no longer able to keep him on his feet, he fell to his hands and knees. He gasped for the dry, cold air that pierced it's way down his windpipe. Blood splattered on the clear snow as he coughed. The sounds of his struggles echoed on the empty street, but it was late and there was no one around to hear. He coughed and coughed, thinking this is the end, this has to be the end.

And then he fell into the snow, passing out, after taking what seemed to be his final breath.