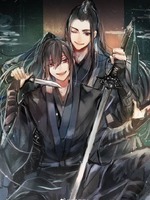 Xiu Jin Fang had been reborn. After he had taken in his disciple, the cause of the world's demise. He hadn't known the reason for his disciple to become a tyrant thirsty for blood. Jun Jian Hui, his disciple although he was not particularly close to him nor to his other disciples, was one of his outstanding disciples until he left his wing to travel the world. That was the last time he heard from him.

Years later, he heard that he became an emperor. It seems that he was the long lost first son of the late emperor. He was not close to him and only accomplished his duties as a teacher should. He was mostly away from his disciples, carrying out his task as a peak elder Who knew it was actually his neglect that caused his disciple to wreck havoc in the three realms?

This time, he thought, I'll make him walk the right path as he should have.

Only...Yes, there is improvement but was his disciple originally this intelligent, this spirituous? But he really never gave time to them and is oblivious to how his disciples lived their lives. He doesn't question it.

Jun Jian Hui was never given a time to just breathe and live his life. His senior brothers' abuse had always bullied him physically and mentally, no one ever wanted to help him. He had to rely on himself to live. Cultivating to become immortal was never his destiny since he was never human to begin with.

He came across a demonic manual and discovered his true identity.

Leaving the place filled with hypocrites under the mask of aloof and intelligent scholars, travelling to become stronger, experiencing more hardship and reaching the peak of his strength, becoming the ruler of all, then finally dying by the hand of the immortals from his previous sect.

He closed his eyes, his soul too tired and scarred. When he opened them again, he was in a body of a child, skin yellowing from malnourishment and bruises of black and blue all over his skin. A sense of dread and fury overcame him.

He had been reborn.

JJH:...Shizun, this is the most prized treasure of the sect-

XJF: What are you looking at? Do you want it?

JJH: (16 yrs old) *looks at a girl from a red house for just a millisecond*

XJF: *Already talking to the manager of the house* I'm buying that girl. *helds his hand out to the girl*

JJH: *with a dark face, grabs his Shizun's naughty hands* Shizun. No. If Shizun wants to bed someone, this disciple will be more than happy to serve him.