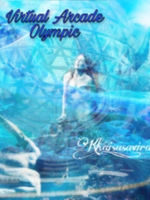 An International Olympic event that is held every
10 years. The olympic games are done in decade for
one time is always changed state to become the
master of the house.


The olympic games in the year to 17 this will be
held on d continent of Asia, the Southedstern
precisely in Indonesia with 9 branches of
international sports and followed by 60 selected
countries around the world. For the sport is divided
into 8 parts one is the "diving to get the treasure".
Every implementation of this olympics, the
organizers have done a thorough research about the
valuable treasures that are still buried to the
earth, the sea or the forest of the world.


For this time, d sport that became the core is
dive virtual objects the sky purple. Such objects are
falling and drowning in the bottom of the ocean Jaya
already for 1000 years. And according to
research scientists, the sky objects that have the
power, which can be the parent satellite
other satellite, its right is to be the holders of
control of the entire satellite there.


Archie Xaveceana are athletes divers from
Indonesia, along with 5 other colledgues united in a
team of Maritime Squad. Then Andrew Lukas derived
from the superpower of the United States, his team
Ocednd. Fight under the sea, which requires
three preliminary round to be able to participate in
the final and dive to the bottom of the sea are
addressed. In the final round, leaving only 10 teams
that can fight and race to get that body.
Both of them stuck in the trough of love to make
the rdce it s getting murky dnd frustrating. It turns
out that the poem was really "loving You is a losing
game". Victory finally won by Archie, he mandged to
find ob.jects in the sky valuable it is. But, one of the
team Oceana piercing her heart from behind her
severely injured and was pronounced dead. When
others no longer fight for her, Andrew came in with
full confidence. A ending or d sad ending? No
one knows it, becduse every people have a point of
view and they own opinion.
Let s see the end of that thought…