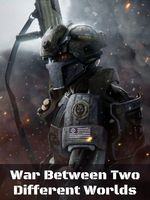 Chapter 1: And It All Starts With A Bath House

Inside the cockpit of a giant combat spaceship, one individual in a combat spacesuit was sitting on his command chair while sipping his coffee beside the red strobe light that glowed like crazy.

Clarisse was the main A.I of the ship. She was the one that manages everything from the ship maintenance robot to the comfort level of the bed of his master. The A.I of every ship was considerably smarter than its master.

The commander of the spaceship sat on his chair and pulled down the thruster stick of his ship. Sweat was flowing like a river on his face.

The ship lowers its speed. He stood up again and looked around beneath the shining red light from the warning light. He moved around and he searched for something in the midst of that chaos.

"Divert power to the auxiliary generator," he said as he tried to figure out what was going on.

In response, he observed the panel on his ship including the broken ones. The panel displayed every information on his ship from the health of the reactor to the combat capability of the ship.

He saw the blue hologram that resembles a woman on the ship. It was his A.I.

"Thank goodness," he wiped his sweat. "What's going on, tell me! Shits are falling apart."

"We have 0.00002% to not colliding with anything and 20% chance to collide with a star and the rest is the chance that we will collide with a planet."

"Colliding? Could it get any worse?"

"Deploy probes to the planet please, " he begged his A.I. Though, deep down in his heart, he knew that the A.I couldn't do anything either.

"As expected, well you've done a good job. Do you have any idea about the damage that we have?"

"Sir, Apparently Main Reactor number 4 blows up and breaking down all of the critical systems, " she said as she showed a large hole on the spaceship.

He bashed at the display panel, "Arggh, that's why I told you to replace the reactor number four. It's old as hell. You idiot A.I"

The spaceship glided at the speed of light and decelerating at a significant rate, but not enough to stop it. Eventually, it would hit something.

The cabin began to be depressurized and the helmet on Gerald's space helmet begun to supply him with oxygen. The coffee that he held on his hand froze instantly.

The thermometer on the spaceship suggested that the temperature on the cabin was 10 Kelvin or -263.15 Celsius. No wonder why the coffee froze instantly. The integrated life support system on his suit was the one that kept him alive.

He sighed at the situation that had worsen, "Ok, now could you launch probe? And please redirect remaining power to the thruster and please shut yourself down."

"Affirmative, see you soon sir. Clarisse shutting down, " she said as the blue hologram that represented her disappear.

The ship cockpit became a quiet place, there was no sound at all. The only thing that was visible was the panel that displayed the ship information and the red strobe light that was shining like a disco ball. The probe was launched to the nearby planet. The ship had decelerated from the ship of light.

[Probe had arrived at destination planet]

Gerald pushed a button on the touchscreen and it showed him the planet in detail.

Conclusion: An Earth-like planet with an unknown substance on the atmosphere with the gravity 90% of Earth. Colonial age civilization, a weird combination of tech had been found. Hostile presence: 30%(Low). Six-time the size of Earth.

'Hmm, it seems to be a safe place. Well, any place to stay is better than to be stranded in space like this.'

Gerald directed all power to the thruster and shut down every other system on the ship except for the propulsion system. He set the coordinate to that planet and directed the autopilot.

He sat on his chair because knowing something that was completely fucked up and he had absolutely zero power to fix it at the moment.

Gerald estimated that by the time the system shut down, the ship would have entered the atmosphere of the planet. So he relaxed on his chair.

The planet was a blueish, but a little bit purpler than the earth. The sky also showed a sign of clouds in the atmosphere.

"Yeah, yeah, I know. Now, could you please shut up for a second," Gerald said to the warning system.

[WARNING! PILOT DOESN'T GIVE A DAMN]

The ship entered the atmosphere, a large red shockwave formed in front of the ship. The air around the ship turned into a hot glowing cloud of plasma eventually. But that ship had the ability to penetrate into a black hole and got out unscathed, so that was not the problem. The main reason why the ship decelerated was in order not to destroy the planet.

The ground on the planet got more clearer. The distinction between land and water got very clear, but the ship had more plans for him.

"That's not good," Gerald uttered just a few seconds before the next thing happened.

"Wait, what??" Gerald questioned the alert before the ejection seat got ejected from the ship at Mach 20 using a basic thruster.

He got very far away from his ship, "NOOOO, My ship!" He freefell on his ship at the altitude of 80km from the ground. The ship that he loved fell down quickly on the ground leaving him that was falling from the sky.

The helm of his combat spacesuit started to turn on. It displayed many digits of information before turning into a combat HUD with a round crosshair in the middle and other information like his health, stamina, fatigue, hunger, and thirst. It also showed the remeaning ammo on his weapon which was included in the SERE kit.

[Estimating location of impact: This place]

This place that the helmet meant was a stained glass window in a private estate located in the middle of the grassland. Since his suit wasn't equipped with a thruster, he couldn't change the location of his landing site.

The box on the back of his suit transformed into three weapons. They were an assault rifle, a smart pistol, and a machete.

The assault rifle was a GG-HK-SG 715 12.7 mm smart assault rifle. It was a 50 round belt feed assault rifle chambered in smart .50 BMG. The rifle searched for its target and the bullet was a homing bullet. Gerald has three magazines for that.

The pistol was a GOK MK 20 Smart pistol. It had the same abilities as the rifle counterpart but only chambered in .45 ACP.

The machete was a high-frequency machete, it able to cut through practically anything. It was made from Neutrotium alloy that made the machete practically indestructible.

Every weapon got holstered except for the pistol which Gerald held on his right hand.

He finally saw that building that became his impact point, he broke through the window and arrived at some sort of hot and steamy room. He felt that his feet were hitting a body of warm water.

[Roger that, lifeform place has been placed on the radar and HUD.]

Weirdly enough, there was only one living creature in that room and it was a woman. The HUD marked her with a red outline, but he couldn't see her real look because of the steam. He readied the pistol on his hand which had locked on the target head, all he had to do was to pull the trigger.

He got closer to the human female, and he shouted, "Freeze!"

One thing he didn't notice was that the room was a bathhouse and that was the reason that his feet felt hot. The adrenaline that rushed through his body clouded his judgment ability and made him didn't realize that he was in someone's else private bathhouse.

Not stopping there, he also noticed that the woman was naked. Although the bottom part was covered in the steamy water.

"Mmm, thanks, but no thanks?" He commented on the helmet analytical ability.

The woman was shocked, she noticed the black heavy armored creature that wore a black helmet in front of her. "Who are you? INTRUDER!"

"Wait! Ah, fuck this shit I'm out," Gerald jumped outside of the bathhouse through the broken window.

This is the first time writing a sci-fi and power fantasy blend. if there is any mistake, please point it out, it will be very appreciated.