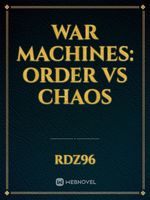 An all out war has been going on for centuries. It is the humans and meta-humans fighting for their lives, and the world against the deceiver and his clan of fallen ones, the hybrids with the transcendental hybrids, and other meta-humans.

The W.M.A have a weapon, who's decimated literally 65% of the deceiver's army. But. HE IS AN EVEN BIGGER THREAT THAN THEM (Or so they think). Now they must bring him to school and teach him how to be KIND. If they don't do that, and he goes rough shot. Then the Glorious one will arrive and make judgment. Sending those who sinned, and any and all meta-humans to the burning lake. With deceiver and the War Machine.

Can this small, purely badass human help this monstrous meta-human gain some humanity? Or will all end up in the pits enclosed with him inside (and a being that even the Deceiver fears)?