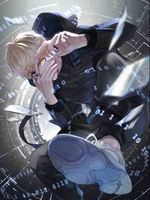 World of Chaos is a full dive VRMMORPG released by Imoogi Tech in 2040.

Within one week, this game has become the most popular game all over the world.

Both male and female from children, teenagers, adults, even the elderly play this game.

Michael is a young, rich man who manages the largest trading company in the world.

He almost died from overwork and because of that, Michael faked his death and hand over his trading company to his father.

Michael who is idle in his mansion is interested in a game that is very popular lately and that game is World of Chaos.

He got interested in World of Chaos after he accidentally saw a livestream video of a streamer on his cell phone.

1. Everything in this book is fictional and not intended to be satirical, demeaning, defamatory, etc.