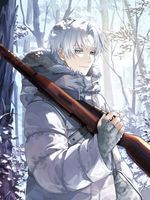 After writing 100 chapters, I decided to do a new author review. I have gotten a great response so far, and that gave me a boost of motivation to keep writing this; and after writing 100 chapters, I already know that the story is only beginning, there is so much left to write, and I have a hunch that it will take easily over 1000 chapters to complete, maybe even 2000. Second, I have gotten a few toxic messages about how MC's looks, because he looks girly and is around 170cm, so I have gotten a lot of messages about making him taller, etc., and that may happen or may not, I am not going to spoil it, but I have reasoning for his looks and his height, and none of those will change before I am ready to reveal the reasoning of his looks and what happened in his childhood. Third, I have written a lot of mystery, and I enjoyed it immensely. I have given a few subtle hints on the chapters that might reveal why MC is different from the rest, and that White Online isn't as normal as it seems at first, so good luck on finding those. Fourth, I have seen a few theories made by my readers, and I am sometimes terrified of how well you guys found out about some things which still haven't been revealed yet; it is nice to see all kinds of theories, even though some aren't correct, but it is still nice to read those. Fifth, about a love interest. Some of you guys might have read the synopsis and seen the tags, but I will still say this. This will be a No Harem novel with only one love interest, and even if some of you guys like Harem, you guys should still try and who knows, some of you might like it. I decided to lock the chapters only around the 53th chap so that everyone has enough time to read and find out if they like it enough to keep paying for more chapters. Thanks, everyone for reading, and I hope you guys support me in this very long journey.
3mth
view 56 replies

Alekzi asked me to leave a review as a fellow author and as the editor of this novel, and I will be as truthful as possible. I wanted to read this, as I am a friend to Alekzi, but I couldn't bring myself to do it at first because as an English native, it was difficult for me to deal with the sentence structure. After some chit-chatting, we came to an agreement that I would help him bring the writing up to snuff. It will take a while, but I'll be doing it as fast as I can for his future readers! Daily released chapters will be edited before posting, and I will tackle the former chapters as I can (: As for the story itself, I regret not reading this sooner! Even if there are issues with the grammar, Alekzi has had experience from writing many books before this, and he has truly mastered the art of captivation! The plot of the novel up to current is well thought out, the outline of current and future novel events is meticulously drawn out, and 'almost' every chapter has just enough entertainment to keep you hooked! Isaac is an intelligent (Not a super genius) character who almost completely lacks prior experience in MMO or VRMMO settings. He doesn't just automatically start as the best in the world as is seen in so many other VRMMO novels, and is actually somewhat outclassed in the earlier chapters. As White Online isn't set up like any VRMMO that was released previously in this world, his intelligence and lack of video game experience actually assist him in climbing his way up the ranks from the bottom of the barrell! I have enjoyed my read, and I hope that my work in raising the quality of this novel helps many others enjoy their read as well!
25d
view 0 replies

Just don’t, the author has absolutely butchered the novel. Characters act completely out of character, suddenly weak and dumb as heck in fights. MC gets steamrolled by random characters just to force him to use his trump cards in meaningless fights.
13h
view 1 replies

ive read about 40ch if he really smart/special like the author want to say he shouldnt be this type of guy and also keep saying hes skin is beautiful, too much is gets annoying.
Reveal Spoiler
15h
view 0 replies

Overall very nice in all aspects buttt.... (328 currently) just dont with Luna and Isaac, just dont. Its the usual problem of novels where you think you need some romance but instead just makes it worse.
2d
view 0 replies

I actually really loved this story. it has a great background and a very interesting plot. I hate the fact that it's pay to read. like I'm really mad lol but I knew what I was getting into so I knew I would hit the barrier. I usually and I mean every story with privileged chapters I ignore because I hate pay to read. This story honestly was too interesting to stop but I literally have no choice anymore. I'm not paying to read a story sorry. I understand it helps the author but sorry not interested in paying to read. Don't let that prevent you from trying to read. like I said it's a great story and the author did a really awesome job. I highly recommend it to anyone who is definitely interested in reading it. just be prepared to pay if you want more then 56 chapters.
12d
view 0 replies

this book is amazing and i love it but the whole reason i decided to read this book is because it popped up when i searched for YANDERE so after reading 270 something chapters i still don’t see a yandere… well there have been some clues of a yandere but not full blown yandere character also is this harem?
14d
view 0 replies

I am currently on chapter 147, I am enjoying the story very much. It is one of those that sticks with you and makes you want to read more and more chapters. The background is wonderful so far, especially the good use of mystery which is fun trying to guess what will happen. That's all for now, plus, author-san, the love interest will be Darth, right? 😂😂 For some reason, he seems perfect for Isaac.
14d
view 0 replies

I don't usually write these. This is a well thought out MC. I overlook the grammar as I can still figure out what is being said. I work at a place where English is not their first language and have come to enjoy this kind of speaking which makes this novel more enjoyable. As a fellow author, keep up the great work and write on!
18d
view 0 replies

this story is so good, i have read a lot of video game novels but this one def in top 3 its rrly good and i like the mysteriousness which makes you wanna read more and find out about it
19d
view 0 replies

It’ s a great read that genuinely gets you invested in both the characters and the plot. I can’t describe how happy I am when I see that there are new chapters. I can’t wait to see where th story goes.
19d
view 0 replies

love the story..i love how detailed it is...mc is smart and has good development side characters are also interesting and easy to remember. i am curious why he is cursed ...my guess is that he was in white online world when he was young and got somthing like legacy of winter god but who know...(author know..)it make me curious about future chapter´s and how will this story develop.. i hope author will make longer chapters
Reveal Spoiler
23d
view 0 replies

Type your review here. Please write your review as detailed as you can. Your reviews would be very important to the story (at least 140 characters). Good good writing
23d
view 0 replies

Just started reading this novel couple of days ago and I've already read 200 chapters. This novel captures the interest pretty early on and is consistently great going forward. I think most readers will really enjoy this.
24d
view 0 replies

Most people won’t read this but if you do, I’ll try to give as unbiased review as possible. The writing quality is generally very good, but the letter “a” may have killed the author’s family as he often forgets to add it into sentences. For the updating stability, the author is pumping out chapters left and right so that’s fine. Story development seems interesting but the author often spoils his own novel as he writes, not sure why tho. Character design is when some onesies start to arise. The main character is supposed to be this super genius but he never actually does anything that smart. It becomes a tell not show sort of situation where the mc is somewhat smart at best. My last gripe with this is that the author includes two full status pages in the same chapter whenever he allocates his skill points. It’s just to boost word count and doesn’t actually contribute anything to the novel Overall, I’d classify this book as McDonalds coffee. Not bad, but could be better
25d
view 0 replies

It’s just an awesome book I recommend it if you enjoy this type of Webnovel.
26d
view 0 replies

Me: *Sees something new in recommended* Me: *Reads description* Me: *Sees “no Harem” in Tags* Me: *Immediately begins reading* Pretty good so far. Gonna keep reading.
27d
view 0 replies

Starting off: A great Novel, don‘t hesitate and just read it! It‘s you typical Video-Game plotline and although that may sound extremely boring and cliché, this Novel still has its own twists and unique feel to it. Is it cliché? Yes! Is it bad? No. I personally enjoyed reading it and would recommend you to do it aswell :).
28d
view 1 replies

Writing quality is fine and thats a give a way for what the story lacks and the story development is so so, not sure if it will improved in the future, Character Design is a bit problematic, The ppl surrounding the Mc is far from normal, theyre bunch of weirdos that makes one worry, idk if theyre experiencing a mental illness or something, being different from the rest is good but, the author made them off the chart like really. Her family being protective is understandable but her sister being a yandere that seems to infect the other character to the point of being a creepy themeselves is what ticked me off. Idk maybe not just for me but you can also try this one out, might works best and suit your taste.
1mth
view 0 replies

Who's the last to like cute.
1mth
view 0 replies
Webnovel