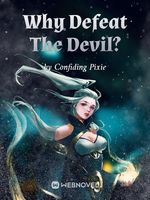 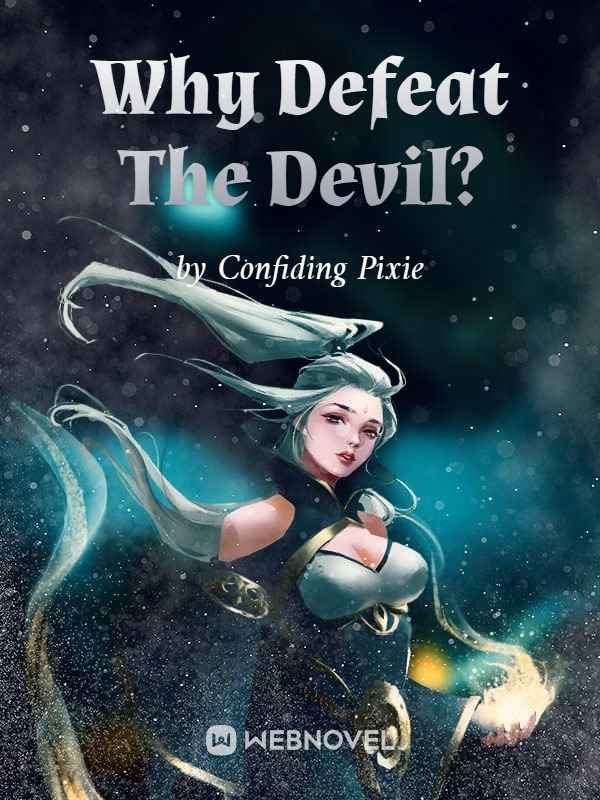 Why Defeat The Devil?

"Devil"– a character which had always appeared in various myths and legends as the symbol of evil, synonymous with brutality.

The sole entity which endangered the world, threatened lives, brought terror and disasters to mankind, and wreaked havoc in the world.

Such a figure was none other than the Devil.

"If that's what you want to believe."

The above dialogue would most likely take place in such situations.

It was the center of an unknown pantheon. There was no shimmering golden décor, nor was there the saintly and solemn atmosphere. It was just a plain white building.

There were currently two silhouettes in the pantheon.

One of them possessed an eternal presence and had always stood in the center of the pantheon. It was the Goddess.

It was certainly the Goddess, no less.

No other word could describe the presence.

She had long silvery hair which flowed over an alluring back, reaching the back of her knees. Even without the wind, it fluttered and swayed gently, glowing with the faintest halo.

Her eyes were pure sapphire like azure planets, and she wore a pristine white dress. Her jade-like feet were fair, and she was standing bare-footed on the floor. With her impeccable figure, she was beautiful beyond comparison in this world. It was like admiring a completed piece of art in the highest category possible, filled with the raw sense of an illusory dream.

Her pristine beauty had the whimsical feeling of a dream. Only a word like "Goddess" could describe her completely.

At any rate, the other silhouette in the pantheon, a bodiless soul floating in the air, thought so.

Initially, he was stunned by the sight too, until the Goddess told him.

"It may seem brusque, but let me get straight to the point."

What point? In short, it was…

"You're dead, but I hope that you'll come to my world to defeat the Devil. Thus, I plan to revive you, and make you the Warrior just so you can go to the world of sword and magic, the Omnipaltansen."

That was it. That was how the conversation began.

In all honesty, he did not buy it.

The world of sword and magic?

It was not like he did not understand what the words meant, but when the words were applied to his situation, he was utterly befuddled.

He did not even know how long it took before he accepted the setting. He was, however, clear about one thing.

If what the Goddess said was true, he was probably dead. If he did not accept the Goddess's offer, what awaited him could vanish, no? What choice would he have then?

The only reason he thought that he was dead was because he could not remember whether he was actually dead or not. He seemed to have forgotten everything about himself.

Why? It was simple.

"Whatever your choice is, the rest aren't necessary."

That was what the Goddess said.

It could not be helped.

If he rejected the Goddess's proposition, his death would be certain.

On the other hand, if he accepted it, his past memories would be erased so as to not affect his new life. Also, his past skills and knowledge would have no impact in the alternate universe.

It had nothing to do with the Goddess.

"Once you die, you'll vanish quickly without a trace. Since I need you, I've summoned the existence of 'you' and recovered the general knowledge portion of your memory, so you can at least comprehend the current situation and what's about to happen next."

The Goddess explained with a smile, staring at him with eyes that were as bright and beautiful as the stars in the night sky.

"You're dead anyway. The memory of your past life is no longer relevant to you. Should you decide to head to the alternate universe, I don't intend the memories of your past life to affect your second life. Similarly, I hope my world's technology won't be too much of a shock as compared to your world's."

In other words, the memory of his past life would be lost regardless of his decision. It was not that he had any complaints.

Firstly, he had no sentiments since he had already lost his memory.

Secondly, it was futile even if he objected to it.

It boiled down to a single fact. He was already dead and should have vanished. How could he ask for more when someone gave him a second life?

To be given a second chance at life was already a gift.

He should be thankful for it.

It was as if the Goddess saw through his thoughts. She nodded nonchalantly and reached toward him with her flawless hand.

"In the name of god, you, from the alternate world, shall be given another life."

Accompanied by the solemn voice which resonated in the pantheon, light burst forth from the transparent silhouette hovering in the air. The radiance blinded like the sun and glittered like the stars.

At the same time, an equally dazzling 'sword' manifested from the transparent silhouette.

"The warrior whom I've waited for a thousand years."

With the utterance, the 'person' and the 'sword' floating in the air disappeared from the pantheon.

The Goddess retracted her hand when it was done, but her gaze lingered in the void as if she was still looking at the silhouette. Muttering to herself, "It's my first time to see such a strong glow. Hopefully he'll be able to fulfill my long-time wish."

With that, the Goddess closed her eyes, and the pantheon was silent once again.

As for the story, it began with this prologue.