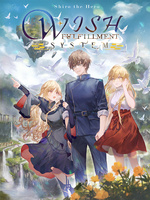 After a long time, Isaac finally succeeded in transcending existence itself, something theoretically almost impossible. Or… he should have succeeded, had he really cut off all of his attachments and feelings, not just the ones connected to the world he lived in. In his ignorance, he hadn’t taken his attachments to worlds he deemed imaginary into account.

After being reminded of this fact, he found himself on the threshold to full transcendence. He had two choices: Either giving up these attachments as well to reach the goal he chased after for so long, or postponing this for later and using the byproduct of his attempt at transcendence - having turned into an all-powerful being beyond existence - to go on a journey in the infinite number of worlds waiting for him.

To fulfill his last wishes and to meet the people he thought fictional before, Isaac used all of his newfound power on a single, tailor-made creation.

This is a story about a number of lonely people trying to overcome their loneliness by sticking together.

This story is something I decided to write for personal enjoyment and so I could share it with a few friends. I decided to start uploading it here so a few of you can potentially get some enjoyment out of it. If you have any constructive criticism or notice a mistake, feel free to let me know, I truly appreciate any chance I can get at improving my writing. Now, if you don't end up enjoying the story, sorry about that. No story is for everyone. And seeing how this one was mostly written purely for my own enjoyment, I don't know how many others will have the same taste as I do.

Yes, this story will incorporate many worlds and characters you're already familiar with. I mean no disrespect to the authors of the original works, I was simply impressed by their creations and decided to borrow them for parts of the story.

(Mostly to give myself some pressure so I actually do something. This might increase in the future if I get more motivated and used to the release schedule. But for now, I'll just build up the additional chapters in case of an emergency.)

In case you want to support my writing endeavours, I'd be grateful if you checked out my Patreon: https://www.patreon.com/sh1ro