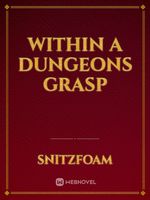 Within a dungeons grasp

Perhaps fighting a beast three times your size on you first day of adventuring with a weapon the size and lethality of a twig is not the greatest idea. I'm sure you know this, but not everyone is as wise and insightful as you. A fine example is Branch, a teenager trying to impress a young girl by the name of Grenade, she looks small and insignificant, but she is actually the greatest ally any party could hope for. Well she would be, but as her name implies, she's not all that helpful after her first attack. Branch is also named based on his abilities, he can't do much other than fall if he's pushed or pulled to hard. That's right, children are born with a certain ability called a "typo" and are not named till their typo is revealed and analyzed. Welcome to the world of Dem-one! Okay now back to Branch.

"C'mon Branch! You can take him! And if you don't I guess we'll have no choice but to leave." That statement is probably the cause of a lot of turmoil in my head, and not that alone, but the fact that Grenade says it every time I have to run from a monster, even when it's an obviously one sided match. Grenade has this idea in her head that I have some "special" typo that gives me the ability to somehow change monsters, she says that when we were growing up in the lithero (Dem-one's word for orphanage) we would play in the snake pits and I would "charm" the reptiles, but I think they were just too weak to bite me so they tried to strangle me instead. Grenades power allows her to shoot an explosion out of any part of her body and use it in various ways, be it movement, attack, clearing a path, you name it, she can only use it once about every three hours though. I on the other hand, was born with a negative typo, one that downgrades my basic human functions, I was born with the incredible ability to pull my hair out, now with extra pain! Grenade says I just have a sensitive scalp and my real power is controlling the beasts that roam the dungeon, but I've never been able to so no one (not even me) believes her.

"I can't! This thing is trying to kill me and you want me to sing to it?!"

"Yes! That's how you used you power when we were kids! If you would just get over your stage freight then this would be so much easier for us!"

"Grenade I'm telling you, I can't control animals! I don't know why the animals didn't attack me as a kid but singing was not the cause!"

A sudden rumble snaps mine, Grenade's, and the monsters heads toward the deeper end of the dungeon. Me and Grenade have a lot of expirience running from things... well I guess Grenade runs after things, point is we run a lot, so immediately bolting from the cave was probably the easiest thing we had done all day. We ran all the way through the dungeon, back to the surface, and through town until we reached our house.

"You've been in the dungeon hundreds of times Grenade, what was that?"