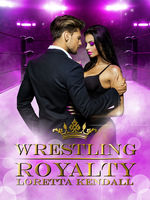 A steamy romance about Arabella Davis, the bad girl rocker chick, turned princess. As the last heir to the throne, Bella is pulled from her quant Ohio life to the small Island of Mecca. Groomed to become the future queen, and continue the royal bloodline, the feisty woman struggles to fit into the royal lifestyle. This is not your average princess story. Princess Bella is the out-of-control royal who has a love for rock music and pro wrestling. She always finds herself in trouble. Especially, when she meets her favorite wrestling icons.

When Arabella meets XFW faction, Rebels of Destruction, she quickly finds herself drawn into a whirlwind romance with the leader of the group, pro wrestler Jett Flynn. When the monarch and Bella's crown become threatened, Jett and her new best friend Scarlett find a loophole in Mecca royal law to save Bella from entering into an arranged marriage. But nothing is as it seems.