XIAOFAN and the EMPRESS - Historical Romance

/ Historical Romance / XIAOFAN and the EMPRESS 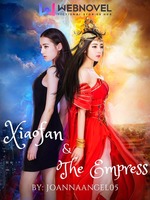 XIAOFAN and the EMPRESS XatE

What happens when you wake up in another body?
What happens when the body you have waken up from belongs to the Empress of the Ming kingdom?
These questions can only be answered by Ying Xiaofan. A young girl from Beijing, China.
***
Ying Xiaofan: A young girl of 25years. A model.
She's nameless and fatherless but what happens when she disappears on her birthday?
***
Qing Xiuying: The current Empress of the Ming kingdom.
She's married to the great Emperor Ju-Long but is only occupying the sit.
***
Ju-Long: The youngest Emperor in the Ming kingdom, Who's name means "As powerful as dragon" depicts that very impact as he has conquered many battles and brought home the victory.
***
Jin Yushen: The man in Xiaofan's world. Powerful and aloof, are the best words to describe him with.
***
This story is a time travel novel...
Both MCs are from different world, do not get confused!
***
"Your highness..." The head maid bowed to her, "Your bathtub has been prepared... This way." She indicates to the door and Xiuying eyesight follows.
Thirty Seconds...
One Minute...
Three Minutes... The maid looks up to see the Empress inspecting her every being and her heart leaps...
"Your highness... His Royal Majesty has arrived!" The eunuch announced the Emperor's arrival.
He walks in and the head maid moves to the side, she bows and flee.
Empress Xiuying hoists her eyes up from his neat white socks and slowly but gradually it gets to his eyes... Their eyes meets for the very first time and her heart leaps at the sight of the great Emperor before him.
He was adorned in a red robe with dragon beautifully embroidered on his flat stomach.
—
She decided to take a stroll around the palace.
In a field, she examined the young lads with eyes filled with lust. She bit her lips seductively and narrowed her eyes.
"These young boys are sexy...I want to taste and ravish them all! Ahhh! They look delicious! Yum!"
Maid Yue watched with her eyes popping out.
'What is the Empress spouting?'
"Hey you!" Xiaofan raised her voice and all eyes turned toward her, "Not you, you!" She raised her head arrogantly. "Come serve me tonight and I will reward you!"
Everyone: "..."
____
A domineering Male Lead but read along as THE EMPRESS tames him!
____
A man with authority and power, but the little affection from Xiaofan swayed him.
There's comedy, love, war, schemes and a slow paced romance, please do not get bored!
Corrections are always welcome!
***
Join the discord fanmily: https://discord.gg/sPJ3yyj and leave your complaints.
The more the collections & votes the more the chapters.(shameless)
Who is gon make a cover for us?(shameless! shameless!! shameless!!!)
###
Let love lead!