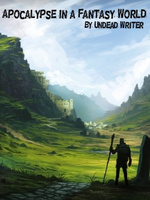 This is a novel about what would happen if the zombie apocalypse happened in a fantasy world. Please help me with my writing by giving me critiques. I’m a new writer so please let me know what you think. Thanks! ——————- The story follows John. The last Human on our earth. As he is about to die, time stops and transparent boxes appear in front of him telling him that he is the last human alive and that he has survived the weeding procedure. Now armed with the knowledge of what happens and how to defeat the abyss’s armies of zombies and evolved he is moved from his sub world to the main world where he is tasked with saving it or risk the extinction of his life and the lives of all life in existence. Join him as he realizes why the boxes said that his world had some deficiencies when made. Join him as he is sent to save, what he would consider a fantasy world, with magic, swords, elves, dragons, and other mystical creatures. Join him as he tries to save the world and all life from the abyss. (Posting every Tuesday and Saturday) ----------- Tags: Video Games, Fantasy, Swords and Magic, Zombies, Slaves, Kingdom Building, Mature Content