The vampire and the mysterious Kitt (discontinued) - Fantasy

/ Fantasy / The vampire and the mysterious Kitt (discontinued) 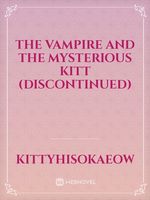 The vampire and the mysterious Kitt (discontinued) Hello?

In a world that was completely ruled by humans, was a young woman who seemed like a normal person, except for her weird background story... But Mei Lynn has a dark secret.. She was originally from a world called “lysteria”, were monsters of all sort lived, and she was a vampire.

But for an unknown reason, she was kicked out from lysteria and told to never return again

Or at least, she THOUGHT she could never return again, but actually, she DID have a chance of returning If she does a certain something.. but of course, she wasn’t informed of this.

Mei Lynn was left in a world that she knew nothing of, all alone.

That is, until she met HIM

Then her whole world started to change because of him

She actually cared for someone for the first time in her whole existence, but when she was informed of her only way to go back home to lysteria, she has to face a tough choice.

She just wants to stay side by side with the man she came to know as Kitt- but things keep interfering and getting in the way of her goals.

(This is a romantic mystery comedy vampire type of story!)