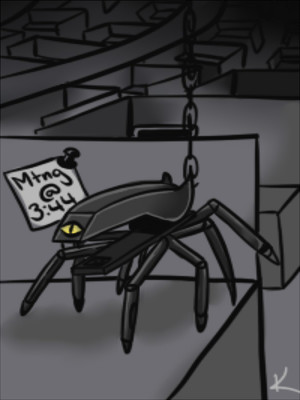 "No, that's a stupid idea! The noise will get us killed." Was the first thing James heard as he came back into the apartment after his meditation class. The speaker, JP, was one of the cluster of people around his living room table, with Anesh sitting at the head with all his GM notes.

"Hey guys." James said. "What noise will get you all killed?" He asked as he dropped the multi-purpose duffel bag that he felt had taken over his life recently on the floor. A chorus of greetings assaulted him from his friends as he walked over and looked down at their game map.

It was JP who answered first. "Alanna wants to bring a chaingun into this place we found."

"Because it's a great idea!" Alanna burst out from across the table. "I am absolutely sure that I can out-DPS the dungeon mobs!"

"It's a terrible idea." JP nodded, speaking to James and ignoring her outburst. "Too much noise attracts more creepy shit, but neither of them want to go with my plan of being stealthy, since they built combat characters."

A disturbing thought struck James. "Wait, hang on. Dungeon? I thought you guys were playing Shadowrun." He asked, looking at notes and character sheet