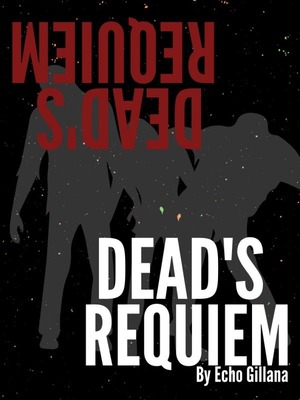 Earth has fallen. The world we once knew had lost its glory and beauty. The civilization we were once part of had finally seen its end. Humans who once reigned the world with their chins up now hide like cockroaches at the sight of danger.

In a desert that had once been a flourishing land, a man was sitting inside a car. He was just about 30 years old but his face was already filled with wrinkles. He had an eye patch over his left eye and a beard that had already grown to about two inches. He wore a leather jacket over a black shirt coupled with tattered jeans and worn sneakers.

Using his cold metallic arm, he pushed his fidgeting legs flat on the ground. He did not want to believe the horrific scene that was laid bare before him. He had undergone endless trials and tribulations only to end up with this.

It had already been five minutes yet the gunshots and explosions had not stopped for even one bit.

With each scream he heard, the Grim Reaper caressed his ear.

(You don't deserve this.)

With every explosion, Death whispered a different word, aggravating the baffled feelings of anger, hope, sadness and loss he was feeling inside.

The sound was reminiscent of a grand orchestra playing a requiem. Each note he heard made him wish none of this was real. That even with all his arduous work, everything would still be futile. That even after everything he has done, he still would not get what he most wanted in his life.

This explosion had a different note.

The orchestra's requiem was disrupted and his mind was cleared of his crippling negative thoughts.

Death whispered onto his ear but the man was oblivious to it.

Death relentlessly dissuaded him from acting but his resolution stood firm. His eyes looked more alive than it had ever been.

Grabbing his binoculars, the man observed the battlefield in front of him. From where he sat, he could see everything that was happening. Cars, trucks, vans and even a Sherman Tank were making its way out of a survivor camp.

Covering the escape of the vehicles were super humans and bombs and traps prepared a long time ago. While the bombs and traps they prepared had managed to thin the horde, the amount they had killed was insignificant.

The horde attacking the base numbered in the hundreds of thousands. For some reason, both the zombies and the beasts were not killing each other as they usually would. In fact, they were even cooperating flawlessly in their attack.

The monsters were being led by a strange beast. Never before had the man seen a beast like this. It resembled a saber-tooth with tentacles for its tail. Most of its body was black save for some neon blue stripes that appeared every other second. Each time it raised its claws, a human was sure to fall.

For once, the beast was hit by a tank's shell. The tank was being driven by a pair of metahuman twins and its crew. The older brother would create a shell while the younger brother would propel the shell using the tank's turret. The shell flew off the tank's turret with a loud bang.The product of their attack was a hundred times more devastating than the regular tanks seven years ago.

However, the strange beast was unaffected. It staggered a bit, glared at the tank and pounced upon it. The tank suddenly exploded as the people inside performed a Kamikaze. However, the last sacrifice of the crew did not injure the beast for even one bit. It did not even leave any scratches.

Casualties continued to increase as the horde had already penetrated the human's defenses. People were getting exhausted and some were getting killed every now and then. Many even chose to self destruct when they were ganged upon by Zombies and Beasts.

Surprisingly, none of them had entertained the notion of retreat. They were hell bent on defending so that their families could successfully escape from this place. Their goal was to reach the other Sovereign's base, a thousand kilometers away. If not for the presence of one of the three Sovereigns, the base would have been overrun a long time ago.

The man who was watching the grotesque scene turned the engine of his vehicle on. His car, a Paramount Marauder, roared as it accelerated towards the battlefield. It was loaded with shotguns, LMG's and MG's which can be activated by voice. These guns would automatically aim at any possible target and would automatically reload when needed.

Even though none of the people used guns anymore because of a certain limitation and that it became ineffective over time, the man was still able to use them.

As a normal human who had nothing special, he found it tough to live in the apocalypse. He had to scrape by, sometimes going on days without food. To survive, he needed to modify the weapons he had acquired from the Shop. In fact, he had tinkered with the weapons to

make them more powerful than ever.

Most of the weapons he made were bombs since he was a Chemist by profession. Using his self-made bombs, he had managed to survive. Some of his weapons, he negotiated from others while some were taken from the people he had fought against. Looking back, he was lucky to survive up until this point as a lone-wolf and an ordinary human.

20 minutes after the attack of the horde, only five humans were left. The rest of the convoy had perished just a second ago when they decided to unleash a massive suicide attack. They all did this so that their Sovereign could at least escape from this place.

Unlike the other metahumans who perished immediately when battling this beast, she managed to last long. Despite multiple bouts, she remained alive and had even heavily wounded the beast, pissing off the latter. As they were battling, the number of remaining humans continued to go down to four and eventually, to three.

Then, another human was killed by a Mutant Snake. "No!"

This was the woman's closest friend since the apocalypse. She met her at the 1st Survivor Camp she stayed in and they never left each other's company. Some even thought that they were sisters due to the way they acted.

In this momentary distraction, her arm was cut off by the beast. She would have been cut in half if it weren't for her Vice-Commander who used his body to defend the attack. However, this act claimed the Vice-Commander's life.

The man with a metal arm was now only a few hundred meters away. He witnessed the series of deaths that occurred, filling his heart with anxiety.

Most of the guns he had equipped had already been ripped off by this time. A portion of the roof behind him had also been torn and the body of the car had numerous dents. Seeing his wife in a pitiable state, he was fuming with anger and desperation. But alas!

The beast was walking slowly towards the woman with mocking eyes. It raised its talons and smiled. Having lost all hope, Kyla did not resist and closed her eyes.

As she closed her eyes, she heard an engine that seemed to roar in anger. She opened her eyes and looked at the direction the sound came from. As her eyesight was already darkening, she could only see an outline of a man driving the jeep. He looked familiar but it didn't matter anymore, she was about to die anyway.

The beast's claws sliced Kyla into pieces. "Nooooo!" The man shouted angrily, sadly and hopelessly. His mind went blank and crashed the car onto the strange beast.

The beast sneered at the act of the puny little man. It slowly raised its tail and stabbed the man on his chest. His blank mind was startled and when he opened his eyes, he saw a black thing with neon blue stripes protruding from his chest. Slowly, the beast lifted the car until the man and the beast looked at each other's eyes.

Then, the man looked at the beast and smiled. The beast sensed danger that it had never felt before. The beast felt something ominous, making it shriek.

There was a weapon that the man had never used nor intended to use. It was just there. He never thought that one day he would actually use it. He would only say three words for that weapon to activate.

The conviction and hate in the man's voice scared the beast. It knew that the man was only an ordinary being since he could not feel any special fluctuations coming from this man. However, the man suddenly became the scariest human that it had ever seen.

The beast wanted to escape from this place but then it found out that the man clung onto its tail tightly. No ordinary human could hold its tail tight unless it had a power comparable to a Sovereign!

The man's bracelet clicked and emitted a sound that was inaudible. A small black hole appeared that quickly grew larger. It started sucking all things from every direction.

As the ominous feeling got worse, the beast cut off its own tail in a bid to escape. Blood sprayed all over the man and a look of relief could be seen on the beast's face. As the beast was about to escape, the man looked the beast in its eyes and shouted.

The moment the man had shouted this one word, the requiem had stopped. The last note to complete the masterpiece has been found.

The man was sucked into the black hole and a dazzling white light filled the landscape.

"Congratulations sir, it's a boy."

"Look Victoria, it's a boy." The man smiled.

"Isn't he as handsome as you honey?"

"Oh, you jest. Of course who else would he look like? Let's name him Ernst. Ernst Haeckel."

Motivational Quotes right in this place. Take the first step to your dreams!