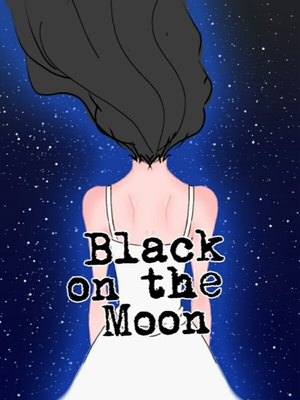 Black on the Moon

She was there again. The beautiful woman he always sees in his dreams. She sits on top of a lotus flower surrounded by water. She never looks back at him but he knows she is beautiful.

"Hello? Can you hear me?" His voice never seems to reach her. He walks towards her but she seems farther away with every step. Why was she so far away?

Who was this woman? Why was he after her? Was she important to him?

His gaze lingers back to the woman's back. She was so beautiful, a being not of this earth. Her long black hair cascaded in soft waves around her. The white dress she wore was splayed neatly inside the flower, the water never touching it. He could hear her silent laughter, but he could not be sure it was from her.

"Miss, please! Can you tell me who you are?" He tried harder. His voice was loud but to his ears it sounded like a gurgle, as if he was underwater. He tried his legs again, this time he mustered all his strength to run as fast as he could. But it never seemed to get him where he wanted to go.

Why was she so far away? Did she not want to meet him?

"What's your name?" He screamed, still a gurgling sound to his ears. "My name is Akim!" She did not respond, she did not even seem to notice him.

He stopped. His mind flooded with thoughts he couldn't understand. The racing in his head made it seem like the world around him was vibrating.

He was going to die! There was no oxygen here. He held his throat. He could finally feel the constricting pain of breathlessness.

How had he been alive all this time?

The ringing grew louder. He closed his eyes. He was almost dead.

The blaring alarm made his eyes dart open. He wasn't on the moon anymore. He was on the floor of his room, at least his head was. He was hanging off of his bed, both legs wrapped tightly in his blankets, cutting off a bit of his circulation.

"What the hell was that?" His voice no longer sounded like he was drowning. He looked at the clock it was past 8 and he knew his mother would be mad.

A long sigh sounds in front of him. His brother, only 5 and he was already so adult-like. Jo stood in front of the open door. His arms on his waist, one holding the arm of his stuffed purple hippo. He was wearing his pink overalls, the pant sleeves just barely reaching his knees. His expression was vaguely disappointed and directed at him.

"Mum is going to bwow a fuse when she sees you." He still couldn't get his L's right. It was the only thing childlike about him.

"Then don't tell her." Akim smiled at his baby brother. He wasn't pleased, not at all. The blond baby harrumphs and walks away. Such a cute child, his heart is always in the right place.

He slips down unto the floor to untangle the mess that was his blanket from his legs. He could never understand how he gets braided into his sheets. Every morning was a struggle to get out. The sea blue blanket was vibrant against his deep caramel skin. It reminded him of the shore, where the sand meets the sea.

"I'm coming, give me a moment. My bladder is killing me." His room was adjacent to the second bath and toilet, for that he was grateful. He shuts the door quickly. He made sure to lock it, his sister Mal was on her way over and he wasn't about to pee himself if he could make it. She took to long whenever she had the chance.

"Akim, you butt! You saw me coming, I need to take a bath!" He was already done emptying his bladder.

Would that stop him from hogging the bathroom? Of course not!

"No, take it a hike." He stood leaning on the door, a smirk on his face. She started pounding on the door. Her screams would alert their mother so he timed it right and as she pounded, he pulled the door open and she tripped on the ledge almost falling over onto the tiled floor. He held her shirt by its collar as she pouted.

"Hey, watch that mouth." He giggled as she stood her upright and left. It was always fun to mess with her. She's always had such a potty mouth.

"Akim, I need your help, come down here." He rushed to the stairs.

His gaze follow the line of the steps. Each step he took seemed to darken in color until it became a stormy grey. His steps stops and as he looks around, he was back.

"Please tell me your name!" His voice, he could hear it this time. She was still inside the lotus flower and so far away. Why did she ignore him?

He took wider steps. It seemed this time, he was getting somewhere. His bare feet felt like cats were licking them, a wet scratchy sensation.

What was so different now? Why was he getting closer to her?

He reached the shore of the large pond. The water, still and glass-like, was a deep navy color, mirroring the empty void that was space.

He was afraid. He knew he was on the moon but he no linger felt the heavy constraints of being breathless. He stared at his bare feet. When had he lost his slippers?

"Akim" It was soft, a voice he's never heard before. He looks around but it was only him and the woman.

Was that her voice?

He stared at her back, hoping she would speak to him again. The dark hair began to float up revealing a pale grey back. Then he realizes, the water was now starting to form bubbles as it floats up into space. But this time he remained grounded to the scratchy sand of the shore.

The water was gone and he now had a path. He started to bolt towards the woman. She was finally at arms reach. He held his left arm up trying to reach her.

His steps were quick and now he was behind her and her lotus. He placed his arm on her shoulder trying get her attention.

The moon grew silent. A deafening blare of complete void. It made his ears ring...

And then that voice came again.

Thanks for choosing this story and actually getting to the end. It's a little confusing and probably out there, I hope none of you get confused.

I'd love to hear from any of you who read this, whether it's to ask me to clarify some things, to praise me, to point out typos and such or even to curse me out!