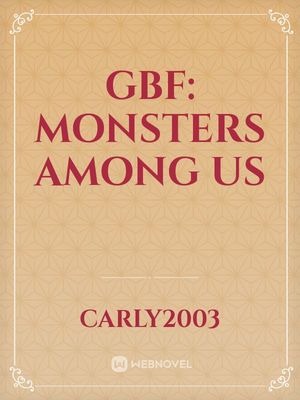 GBF: Monsters Among Us

"Cachions. A feisty, intelligent, hard driven species. Hard driven to wiping out every superhuman in existence. Disguised as humans, these creatures are definitely not something you want to deal with. They're mean. They're fiercely determined. And above all, they want to murder each and every one of us. Each was specifically designed to kill us. Population is in the thousands. So far, we can identify three just by sight. A legion of superhuman killers are hidden all around us and only one of us can see them," I stopped my statements for a second, glancing at Gray and then back at the rest of the group, "This time, we can't just throw me into the storm to fight my way out, I fear that this enemy might actually be able to kill me. We need a thought out plan this time around."

The Headquarters never looked more full. Carter, Kathy, Nathan, Liam, Madelyn, Sage, Sarah, Gray, Clay, Dylan, Aspen, Eclipse, Hannah, Axel, Ryder, Cornelius, Gena, Paige, Henry, Charlotte, Cleo, and Daisy were all sitting around the conference table. I sat in the seat closest to the door, a seat I had taken a liking to for the past two years.

Clay and Gray, brothers who were superhumans that I met a year ago shrugged their shoulders in unison.

"We can hit Tobias with a knife," Dylan suggested.

"Dylan I think that's the definition of stabbing someone," Carter sighed as he sunk back in his chair.

"You're the one who comes up with the ideas," Madelyn said to me. She shrugged and shook her head lightly.

"And I've got nothing, you mean to tell me in a room of twenty two people: nobody has a single idea of how to handle this war we're about to walk into?" I said as I stood up and put my hands flat on the table.

I turned to see future Rachel standing in the doorway holding a sandwich.

"Sorry I was late," she lifted the sandwich a little higher, "I was getting a sandwich."

I shook my head and smiled, "Just sit down you fruitloop."

"What'd I miss?" Rachel asked as she took a seat on the opposite side of the table.

Rachel started to choke on her sandwich.

She couched a few times and then looked at me wide eyed.

"That's not supposed to happen for another two years," Rachel gasped.

"Thank you, for once again, for ruining a perfectly good timeline," Liam turned to Henry.

"Stop turning on one another, we need to stay strong together," Daisy snapped.

"When did you meet Daisy?" Rachel asked as she looked over at Daisy.

"Who is this person?" Daisy asked.

"That's Rachel. And Rachel I met Daisy after Bob killed everyone."

"We seriously don't have time for introductions, there's an army that wants to slaughter every one of us," Nathan inserted.

Hannah stood up, "He's right, there's a time and a place and this is neither."

"As far as I've heard, nobody here has thought of an idea yet so what's the harm in learning about the people I'll be fighting beside," Rachel calmly stated.

"If y'all could stop ruining the timeline that would be great," Carter groaned.

I face palmed and shook my head.

"Can we focus for once," I growled.

Rachel shook her head; standing up, Rachel walked to the wall and gently placed her forehead on it. I could tell she was stressing.

"I have to go," Rachel whispered as she started walking towards the door. I quickly slammed it shut and stood infront of it.

"Please sit down and eat your sandwich," I told her. She stopped, assessing the situation for a second. She shook her head and went to sit down again.

"Why did you need to leave? What do you know?" I asked.

Everyone turned to me either wide eyed or teary eyes.

"You broke the one rule we've reiterated a million times to you."

"Nathan it's okay," I whispered.

Carter's face started to pale and nose started to turn a light shade of red. Tears started to form in his already bloodshot eyes.

"Listen," I snapped, slamming my fists onto the table, "Nobody is going to die, not on my watch."

"That's the exact way you die, saving everyone," Rachel added.

"I'm telling her so she fixes her actions so she doesn't die!" Rachel snapped at Nathan who immediately sat back down.

"So much for not turning on eachother," Kathy sighed sarcastically.

"Nobody is dying okay," I assured them, "Now Rachel, what do you know about Cachions?"

"They have an entire civilization located just above New York over the Canadian border. They can't kill their own, it's against everything they believe. They want to kill each and every one of us superhumans. They can kill Carla, the leaders did, they're the strongest."

"They've got to have a weakness," Carter said.

Rachel looked at him and shook her head. She looked back to me, "No weaknesses."

Rachel snapped her fingers and looked between Nathan and I, "They can't use their powers on you if they can't see you."

Rachel shook her head, "They see when we use powers. Kinda like a third eye."

"What if we just go back to the island?" Daisy suggested.

Liam pointed at her, "You weren't there therefore no opinions concerning that."

"You said you killed the commander," Henry explained, "That means there are no threats on the island."

"Your opinion about that isn't valid," Liam said as he pointed at Henry, "You weren't there."

"Oh I'm sorry I wasn't adopted when you were 14," Henry sarcastically said as he rolled his eyes, "I'm just spitting out ideas."

"Bad ones," Madelyn mumbled under her breath.

"I don't see you contributing," Charlotte growled at Madelyn.

I punched the table top which cause my whole fist to go right through it.

"You are sticking me in the middle," I snapped, "I can't choose a side because I'm either arguing against my family or against my friends. Everyone get along. I'm sick of the bickering. We're not going back to the island, we're already here and almost died getting here. In addition to all of this, nobody else is giving ideas so don't criticize the people actually using the brain God gave them!"

Everyone looked at me wide eyed as I sat in my seat.

"Everyone sit and take a breather," I said calmly, "We're not getting anywhere by fighting with one another."

It was silent for a good minute or so.

"Rachel," I calmly said, "What kind of government?"

"That's why Tobias targeted you," Madelyn realized, "They see you as Alpha."

"Not necessarily," Carter explained, "If they saw you as Alpha then they would've formally challenged you."

"The same way I challenged you," Ryder added.

"They know you're Christian so they gave you all Hebrew names." Rachel answered.

"Atarah means crowned, they use it like Queen. Ariella means lioness of God." Rachel explained.

"They have a different dialect so it sounds different then how'd we say it," Rachel explained.

"How do you know so much about them?" Liam asked Rachel.

"Because they kill me too," Rachel explained.

Silence ripped through the air as everyone thought for a few seconds about what Rachel had just said.

"How are you here then?" Madelyn asked.

"I went forward in time because I needed help with something in the past," Rachel said, "And they told me how I died. They told me a lot about Cachions. The city actually used us as slaves."

"I'm not from your timeline stupid," Rachel snapped, "You stab mom in the back in my timeline, in my timeline you never got adopted by Carla because Paige and Ryder never killed eachother."

"Wonderful," I sighed as I face palmed.

"Can someone explain the time travelers to me one for time, I'm confused," Clay inserted as he looked around the room.

"I've been living with them for three years and I still don't understand it," Kathy sighed.

"So if I walk up in there and challenge their Alpha..." I started.

"Wait, you said they can't hurt their own right?" Madelyn said as she stood up and looked at Rachel.

Rachel nodded. I saw what she was getting at.

"How do we turn ourselves into one?" Madelyn asked.

"They're a species Madelyn," Liam explained, "You can't turn yourself into a monster."

"You can turn into one," Rachel explained with a nod, "You wont be the same though. You're be more unpredictable."

"We're not turning Carla into one then," Axel said.

I glared at him and so did Carter.

"Of everyone in here, Carla and Carter are the only two who are strong enough to withstand the procedure." Rachel explained.

"So Carter then," Axel insisted.

"I'm not being turned into one unless Atarah Ariella is one too," Carter said as he smiled at me.

"Atarah Capala," Rachel sighed as she started rubbing her temples.

"Capala, one who is lightning fast," Rachel sighed, "Your name."

"I like these Hebrew names more than our actual names, is that weird?" Axel asked.

"Your name means scapegoat so I might want to change that opinion if I was you," Rachel explained.

"Why does my name mean scapegoat?" Axel asked, "What happens to me?"

"You guys make me bait?" Axel asked, "Why would you do that?"

"Both you and Gena become bait," Rachel stated.

I grabbed my knife from my pocket and threw it at Rachel, purposely landing it in the wooden wall behind her. The knife stuck in the wall just an inch from Rachel's throat. She looked wide eyed at me as she realized that I had just thrown a knife by her throat.

"Shut it, or next time it's going to be your voice box," I growled.

Too far, I know, but I was making a point. She knew I wouldn't kill her.

"Atarah Ariella," Rachel stated as she stood up and looked down, "Lo e'ese et ze shuv."

"What does that mean?" Liam asked Kathy.

"She said she won't do it again," Kathy sighed.

Man I love the fact she can understand every language.

I nodded at Rachel who then took the knife from the wall and handed it to me. I put it back in my thigh holster and sat back in my seat.

"What would've happened if you actually stabbed her?" Gena asked.

"I guess we would've seen what hitting someone with a knife would look like," I responded with a shrug.