/ Contemporary Romance / Hellbound With You 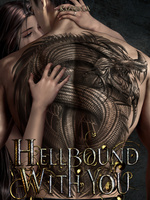 Hellbound With You HWY

[WARNING: THIS NOVEL IS R-18]
“Little lamb, let me tell you this. You’re standing before the gates of hell right now. Doing this means ruining your life. Are you ready to step down to hell with me?”

As the silence dragged on, the man’s lips curved up into a triumphant, mocking smile and his hand landed on her head. He ruffled her hair and leaned in on her.

“Hell is not a good place, at least for a little lamb like you. I’m sure you’re aware of that. Now run away while this demon king is still being nice and calm.” He whispered and then, he turned to leave, so casually, as if nothing just happened. But after three steps, the girl stopped him again.

They say he's a creature from Hell; cold, hard and heartless.
He claimed to only be in loveless, seemingly fake relationships. But why is that? Is there something more to this mysterious man, something that has made him that way?

She is a goody two shoes; well, so they say. She dresses like an ugly duckling to keep the men away. She had never had a relationship before because, well… that's her secret to tell.
She is young, almost hopeless, and looking for something, or someone, to fulfill her single wish.

The two meet under very strange circumstances and in the first meeting, she believes she has finally found it; the answer of her wish.

●the cover is not mine. all credit belongs to the artist/owner