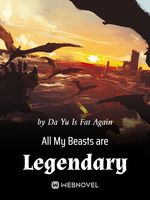 All My Beasts are Legendary

The sky was blue, and the sunlight was dazzling like fire.

At about four o'clock in the afternoon, a large group of students flocked out of Yunhai City's No. 3 Senior High School as the bell rang throughout the building.

"Ye Xuan, the college entrance examination is two months away. So, how's your prepping? Are you confident about becoming a Dark Iron Warrior in two months?"

Ye Xuan, who was walking out of the school with his classmates, was about 1.8 meters tall, had a well-proportioned physique, and looked pretty muscular.

In this world, Spirit Aura had been recovered about 300 years ago, and monsters were all over creation. At the same time, mankind had opened up their path of cultivation after activating some ancient relics.

There were two paths to cultivation.

One of them was the Warrior Path, which was the one that most people opted for.

The other was the path of Beast Tamers, a profession that would allow one to tame monsters. But it was only available to those with unique qualifications.

It had been 17 years since Ye Xuan had traversed to this parallel earth.

Because he hadn't awakened the aptitude of Beast Tamers, he could only choose the Warrior Path, which most people took.

However, even the Warrior Path was by no means easy.

If someone wanted to be admitted into a good university for warriors, they had to become a Dark Iron Warrior before they took the college entrance examination.

"With your qualifications, it's true that it'll be a little more difficult for you to become a Dark Iron Warrior in two months," Chai Chang said to Ye Xuan as he walked by his side. "But a tutor from Wanshan University will be coming tomorrow. They said that he'll select a few students from our school in advance. This may be a good opportunity; you can't be too sure about that."

Chai Chang was Ye Xuan's best friend. The two had grown up together. As Ye Xuan was a traverser, he was different from everyone else ever since he was a child. Under Ye Xuan's subtle influence, Chai Chang had always followed his lead.

However, he came from a better background than Ye Xuan.

Aside from talent, resources were also essential when it came to the Warrior Path.

At present, he was already a Top-level Warrior Apprentice and was only one step away from becoming a Dark Iron Warrior.

What's more, he would most likely become a Dark Iron Warrior before the college entrance examination.

Hence, compared to Ye Xuan, Chai Chang was slightly further ahead on the Warrior Path.

It was just that after nodding, Ye Xuan subconsciously glanced at the countdown timer in his field of vision.

Ever since he had traversed to this world, there was a countdown timer, which only he himself could see, in his field of vision.

Now, this countdown timer was about to end in less than 24 hours.

As for what would happen once it ended, even Ye Xuan himself had no clue.

"Will I get a cheat code?" he thought.

"Or will I die after the countdown ends?"

This was the nth time he had thought of this question after arriving in this world.

For that reason, at this moment, seeing that the countdown was about to end in less than a day, in spite of his anticipation as to what would happen, he was also a little nervous.

At that moment, a group of five or six teenagers walked over to Ye Xuan and Chai Chang.

The teenager wearing white clothes, and who was the group's leader, chuckled as he said, "So? An Zhenghao, are you telling us you actually know something about it?"

Seeing this group of people, Chai Chang knitted his eyebrows.

An Zhenghao was his and Ye Xuan's classmate. However, he came from a better background than the both of them, and he'd had a breakthrough two months ago on his path to becoming a Dark Iron Warrior.

But the main reason he was frowning was because An Zhenghao was on extremely bad terms with both him and Ye Xuan.

The two parties had clashed more than once.

"Of course," An Zhenghao said matter of factly, "My brother's at Wanshan University. He told me a very long time ago that this time, the reason Wanshan University's tutor will be visiting our school is to recruit students in advance.

"However, Wanshan University is only selecting students who are Dark Iron Warriors or geniuses with Beast Taming qualifications."

"As for those below the Dark Iron rank, it's not like you have absolutely no chance. However, there will only be one placement for our entire school. If the both of you want to get that placement, do make sure that you seize this opportunity, haha…"

After he finished saying all this, An Zhenghao walked away with a smug smile on his face.

"What a scoundrel!" Seeing An Zhenghao's smug expression, Chai Chang clenched his fists in rage.

"Alright, enough of that." Ye Xuan tugged at Chai Chang. "You don't have to bother about that kind of person."

"He just p*sses me off, you know," Chai Chang said through gritted teeth. "Lil Wan has been with you since you were little. It's even fair to say that she's your family. And that guy, he's always wanted to buy Lil Wan from you, and because you turned him down, he keeps making trouble for you! That's seriously too much bullying!"

He immediately stretched out his hand, and a little girl, who was dressed in a delicate skirt and was the size of a thumb, appeared in his palm.

This little girl was Lil Wan, the person Chai Cheng had mentioned.

She wasn't a human, but an elf.

She was a playmate that Ye Xuan's parents had found for him when he was young.

Elves were one of many monsters. They couldn't really fight. However, they had high intelligence, loved reading, and could speak the human language.

For this reason, one could say that she was Ye Xuan's friend and also Ye Xuan's home tutor ever since Ye Xuan was a child.

Many children from rich families wanted to get one as a pet. It was exactly because An Zhenghao wanted to buy Lil Wan from Ye Xuan that he was always causing trouble for him.

"I caused you trouble again," Lil Wan, who was only the size of a thumb, said sullenly as she stood in Ye Xuan's palm.

She was only the size of a thumb. When Ye Xuan was little, she could teach Ye Xuan some things, but now, she couldn't help Ye Xuan all that much.

He could only hope that when the countdown timer in his field of vision ended tomorrow, his current situation would become slightly better.

Otherwise, with his talent, he might not be able to accomplish anything major in his entire life.

He was destined to live an ordinary life.

Evidently, deep down, she was still feeling uneasy.

There were many kinds of monsters in this world. Most of them were extremely aggressive and were enemies to mankind.

However, not all monsters were mankind's enemies.

Ye Xuan and Chai Chang walked all the way back home.

The two lived in a small community that was only ten minutes away from the academy, so it didn't take long for them to reach home.

Ye Xuan waved to Chai Chang and walked to his home.

Back at home, Ye Xuan greeted his father, Ye Guotao, and his mother, Su Yunmeng.

They were his parents in this life. Although they didn't have any great abilities, they loved him very much, and the three of them had harmonious relationships with each other.

This allowed Ye Xuan, who had been an orphan in his previous life, to easily integrate into this family.

"Ye Xuan." Seeing that Ye Xuan was back home, Ye Guotao walked over and handed him a white porcelain bottle. "I went to your uncle's place today. He knows that you're about to take the college entrance examination soon and told me to give you this bottle of Energy Pills.

"During these next two months, use the Energy Pills to cultivate. Try your best to improve yourself before the college entrance examination."

Ye Xuan showed a hint of surprise. "Where did Uncle get these from?"

Energy Pills were one of the best medicines to assist apprentice-level Warriors in their cultivation.

After all, his parents were just ordinary workers, and apart from him, his family had a lot of other things to buy.

"Ye Han mailed them over," Ye Guotao explained. "I heard that Ye Han performed quite well at Jumu University. He scored among the best on his assessment not too long ago and won many rewards."

He Han was his uncle's only son.

They had always been on good terms with his uncle's family, and his relationship with his cousin, Ye Han, was also really good.

Last year, Ye Han was admitted to Jumu University as a Beast Tamer.

Like Wanshan University, Jumu University was ranked among the top ten universities in Jiangzhou, one of the nine prefectures in Xia County.

After finding out that Ye Han was doing well at Jumu University, Ye Xuan felt very happy for him.

Whether good or bad, the outcome of the countdown timer was still uncertain.

But with this bottle of Energy Pills in his hand, he might actually be able to break into the Dark Iron rank before the college entrance examination.

"Even if Ye Han is doing great at Jumu University, I bet a bottle of Energy Pills worth 300,000 dollars is still a great deal to him."

After going to his room, Ye Xuan immediately took out his phone and called Ye Han.

The phone rang for a while, but no one answered.

This was entirely normal.

At Jumu University, Ye Han was busy every single day.

Most of the time, he was the one who would call him, while he, on the other hand, couldn't get ahold of him.

Ye Xuan took a deep breath. The only thing he could do was remember his kindness.