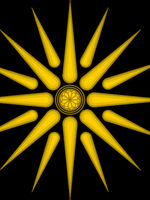 I was dead but I could see, my body was in a golden casket with my scarred hands out for the world to see,

I was dead but I could hear, my generals arguing over which parts of the empire they could have "it's a shame isn't it Alexander III of Macedon, son of Philip and Olympias" Alexander was shocked to hear this voice loud and clear over the voices of his army.

Suddenly his surroundings crumbled around him his men falling with it until there was nothing then an old man appeared before Alexander with wings "are you... Thanatos" the conquerer asked giving out a hint of fear.

The old man said "no" Alexander was confused his mother told him that if he should die the angel of death Thanatos will come to reap his soul. the conquerer was confused "surely the gods have mistaken..."

" no gods" the old man said for the first time he started to move towards him "Alexander have you ever had a thought that occurred that your gods were not real?" Alexander had an occurring thought when he was on his death bed he thought the gods have forgotten him leaving him to die but what the old man said left him speechless" the..the gods are not real? the old man gave him a cold look "Alexander these gods you worshiped were nothing but a creation of humans the real God is " The One"

he has seen your sins for you have murdered many men" Alexander had a surge of happiness in him when the old man said "The one" but it went away "who is the one?" the young conquerer said he felt no happiness when he said the title. the old man said " the one is the one who gave life to you to the animals and this universe"

alexander again feeling the happiness in him but it was short-lived "so I suppose I am going to the underworld or hell since I have killed hundreds of men" Alex said, the old man touched his shoulder and said "yes you have but that was on the battlefield and most of them were rapists, murderers, and thieves but even though you have killed hundreds your good deads have outdone your bad ones just by a little"

" I have consulted with the One he has told me which place you should go" again alex felt enlightened by the one but then he asked "where?" the old man grinned "a dangerous place not cruel as hell or good as heaven but there you will atone for your sins" Alexander again engulfed in fear "pl..please I do not think I could endure the place the One has made for me" the old man grinned

" Alexander the lll son of Philip you are and will be the bravest man that I have reaped,fear not for you can endure this place, remember you defeated the Persian empire crossed the hellespont you conquered from Greece to the indus river of Pakistan if not for your untimely death you would've destroyed the Chinese emperor"

Alexander hearing those words of his accomplishments reminded him of his speech yet he found strength of confidence in him he rose up and said " when should I arrive to this place?" the old man said " I'm afraid the place your going to would be too easy, you would thrive so I'm going to have to take you memories away" hearing that he said " but that w..."

the old man spoke "the One has told me to give you three wishes, young conquerer and three attributes for when you arrive at your place So Alexander the lll of macedon what will you wish for your first?" Alexander didn't know what but he cared for his empire but more for his family " I wish to see what becomes of my empire and my family" Alexander then saw the old man frown " Alexander you would wish to waste your precious wish on something that wouldn't benefit you in the other place that is a world which you will be born into and die in there?"

Alexander paused processing what he said "yes I'm sure that is what I want for my first to be " the old man looked disappointed "All alright then" he snapped his fingers at Alexander. in his mind Alexander saw his empires future his family's and the world's the conquerer fell on his knees processing

"my.... family...poisoned...my empire fallen" Alexander then tightened his fist then loosened " young conquerer," said the old man "your second wish?" Alexander paused and then said "I want my memory's"

Alexander said "yes would you allow that"

the old man closed his eyes and opened "yes now your third wish," said the old man. Alexander thought and said "I want full control of the elements" the old man laughed and said, "fool that power doesn't belong in that world think of another choice young conquerer"

"now young conquerer your first attribute" Alexander knowing of this world he needed ti be smart "intelligence, the smartest person in that world I would like to be smarter ten-fold" the old man confused " do you not want strength? mastery over weapons, and the magic there?"

the old man was curious since usually, people like him want strength, power, and magic but he didn't want it. "I'm sure I want this attribute, " the young conquerer said, the old man looked at him, and by the gods, Alex went on down on his knees hurting them looking up he found a humanoid creature with a straight posture his skin had faces on him, so many, Alexander thought. the faces were screaming yet they couldn't be heard Alexander felt fear, not of death but something else he wetted himself but he didn't know

he couldn't get up, his lungs couldnt inhale or exhale "can't..breath" Alexander softly spoke with anguish. the dark figure moved his mouth " why are you here demon" his words made the hairs on the back of his neck stand "please..stop..i..cant...

the moment he heard that word he looked around but couldn't see anything but light same as before. Suddenly he could breathe were and his leg hair was dry he looked at the place where the dark figure was standing it was the old man he was on his knees, his hands clutched and crying begging for forgiveness.

He then stopped and said thank you before opening his eyes not even a second he went on his knees in front of Alex and said "forgive me, Alexander of Macedon, I thought you were something else" Alexander forgave the man because he didn't feel any hatred against him like all his bad emotions went away, Alexander said " should we move on to the second" the old man nodded

Alexander didn't know what he wanted but it came to mind that if he died what would happen "oh servant of The One what would happen to me if I were to die?" said Alexander the old man put his fingers around his sharp bearded chin and said "well young conquerer you have one chance if you die of old age then you may go to heaven but if you die by any other causes" the old man gave a cold stare "you go to hell" Alexander quickly said

"and for you last what do you want Alexander?" Alexander knowing he died by poison. said "I want a body that heals its wound faster than a normal person and with that body, a strong immune system to defend poison" stated Alex the old man said that is two seperate needs but Alex reminded that he almost killed him

" quite brave of you to say, that but oh well I suppose it is my fault" the old man said he snapped his fingers and said "we will add a few things in there if it gets too easy for you" the old man grinned Alexander didn't know what he meant but he wanted to ask him something. but it was too late the man chuckled and summoned a dark sword with moved with such speed that cannot be seen by the eye, he shoved it in Alexanders heart and then nothing.

excuse my Grammer it gets better late.