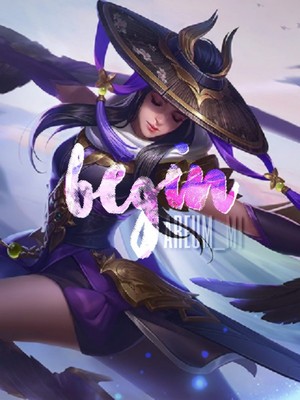 Every minute of every day, she was chosen, and the words of this well-known sentence had always rolled down her tongue smoothly. Fanny smiled at the glass wall in front of her, her eyes trying to see who was at the other side of it.

The male looked familiar, his glasses and coloured hair—a man who's been using Fanny since the beginning of this game she was in.

"Du Zhen Xiong, my saviour," Fanny sighed in relief, thanking god that she wouldn't have to slam herself onto the walls again. As the red numbers counted down to zero, she glanced to her right to see who she'd be fighting with in this battle.

Tigreal had already been looking at her from afar, his stern glare sending her the message; "You'd better behave."

Fanny giggled, she wasn't fazed by this. She'd grown up with him, after all. Seeing his little sister smile, Tigreal's features soften, but he regained himself quick enough that you wouldn't've noticed such a change.

The assassin tilted her head slightly to see the remaining people in her team.

The last one at the very far end was blocked by Minotaur's huge body, making Fanny bend herself ninety degrees just to see who it was. Brown locks, sharp features, a perfect jaw that seemed like it was sculpted by Donatello himself.

You'd expect a woman to swoon at such a face, but no, not Fanny. Instead, her face automatically twisted in disgust. "Why on EARTH does it have to be GUSION?!"

The tall male smirked when he heard his name, recognizing the tough voice. Gusion turned his head to look at the blonde woman, sending her a teasing wink with a gleam of mischievousness in his cerulean irises.

Going through the teleportation to the Western Expanse was harder than the battle itself. Why, you ask? Teleportation sounds cool, doesn't it? But think about it, a teleportation device hasn't been invented yet in reality. One single mistake in the programming, and it might cost lives.

In a game where only the characters have backgrounds, programmed personalities, powers and all—do you think the developers put time into how things work in THIS universe? Of course not.

With lack of detail towards these things, it caused malfunctions all over the MLBB universe. Just like the teleportation process; each and every time, Fany felt like she was drowning, unable to move, nor breathe. It was dark and cold, and it was as if she was sinking deeper, and deeper.

Fanny gasped for air, alerting the other four who were with her. Tigreal pat her back repeatedly, worried about his sister—but they couldn't delay the game just because of one teammate. "Keep it together, Fanny."

As they head to their lanes, Fanny looked back. Minotaur and Gusion were on their way to the mid lane, while the remaining two paced to the bottom lane. Kagura glanced at Fanny, giving her a worried look.

'I'm okay' she mouthed to the mage, giving her a thumbs up. Kagura acknowledged this with a small smile, and continued running with the armoured tank.

A sigh escaped Fanny's lips. How come they're used to the loading phase? Why was it so hard for her, and easy for them? She sat herself on the ground in the bush near the spawn of the jungle monster, placing her chin on her palm.

"Thirty," Fanny counted once again, waiting for the monster to spawn. "Thirty-one."

The tall leaves of the bush she was in were moved apart. Fanny immediately stood up and yielded her blades to the neck of the person. Piercing sky blue eyes stare back at hers, a familiar smirk on the man's face—

As a Fanny main, and a writer in general, I like to imagine how life works as a video game character—how it's like to be used by multiple people with different playstyles, and how it's like to be resurrected after a few set seconds.

So I'll take this opportunity to visualize that, and make this fantasy, a reality in this book.