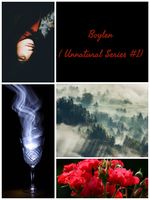 Sunday Mornings were supposed to be about easy and relaxing. A Sunday morning was supposed to have a bright sunny morning and the song of birds fluttering through the air as relaxed from the long week and workdays. But, Instead of all of those things the entire being of that classic Sunday morning was not going to happen for Bo. Instead, Boylen awoke to a cloudy and cold August morning and a very sacred cow.

"Come on, Peggie. It's ok. It's an alright girl." Boylen cooed as her only cow mooed back at her in fear. The one-ton jersey eyed her with anxiety, the white of her eyes clear and filled with distrust as Boylen tried to move her from the barn and into the pasture. When the cow tugged back pulling Boylen forward and into the cow's large black body. She finally relented and rubbed her neck to try and calm her down. Peggie had always been a nervous and jittery cow. It was what made her so dangerous to be around because a simple snap of a branch could send her into a run. The man at the auction had sold her cheap knowing the cow was never going to produce a generous amount of milk like another jersey. In his mind, The farmer figured she could at least make a somewhat good meal for a low-income family.. As Boylen cooed once more to the nervous bovine. The idea of a town breakfast became more and more interesting. Peggie would never let her near her teats now, and she was going to fight her for half a pail of milk so that she could add it to her coffee.

"Alright, Peggie. I guess some Hay is going to be your breakfast today." Bo whispered as she eased the rope around her neck. Peggie gave one more panicked moo before running back towards her pen. As Bo closed the gate to her pen, Peggie reached her head over the gate and eyed Bo with now a look of curiosity. Bo sighed "Now, You're curious. " Peggie licked her hand before giving a low moo. She shook her head before saying "Alright, speckle lady. Let's get you some breakfast." Bo rubbed the bovine's head before heading to a stack of hay. They were large stacks nearly as big as Bo but she eased them off the floor as though they weighed a small box. Peggie now mooed with excitement as Bo neared making the young woman smile. The cow though difficult, was an interesting creature when It wasn't scared, and more often she enjoyed watching the bovine interact with the other animals on the farm. She used a knife to cut the rope wrapping the hay before taking arms full and shaking them over the edge. Peggie mooed once more before bending her massive head down to munch on the yellow and green treat. Bo shook her head before grabbing the discarded rope and heading out of the barn. in the front yard, all the rest of her animals were enjoying their day even though Bo couldn't help but feel as though a day such as this was not a good sign. She couldn't help but allow some happiness to fill her as she watched the kids of her goats jump and play or her chickens as they clucked about with one another.

She breathed in enjoying the moment before moving towards her house. Her home was a small cottage nestled right in the beginnings of the forest at the very top of the hill. The land in front of her home had been cleared making the place perfect for farming while the back had still the thick lush wilderness that was perfect for picking in the early spring and late summertime. The house itself compared to the other homes in town was made of stone instead of lumber. It was a light grey in appearance with a dark black roof but it was covered with long vines that when in full bloom opened up to blue and pink flowers that released a pleasing scent. When she got to the top of the hill she heard a loud shrill voice yell from the very top.

"Boylen! Boylen, Where are you?" Bo sighed at the sound of Mrs. Williams voice. As she neared the top of the hill, Bo spotted the wiry white hair and bright blue color of her dress. Mrs. Williams turned towards her with a grim smile and a look of disapproval. "What have I done know?" Bo growled as she came to the older woman's side. "Mrs. Donald wanted to know if you've have seen her son. She sent him to visit you last night and he never came back." Bo rolled her eyes and smiled. She walked towards her door and pushed it open to reveal a small young boy sleeping close to her fire. He couldn't be more than maybe elven but he was wrapped in a large fleece blanket. "Do Tell Mrs. Donald to thank you for the dinner but do tell her that sending him up the mountain so late isn't safe. Just because we got cowboys running around doesn't make it safe for a little boy to be running through the forest." Williams cleared her throat before walking towards Robert. The woman left an air of embarrassment and relief behind her as she walked into the room. Bo couldn't help but let out a laugh as she followed after. Mrs. William sighed as she bent to wake the boy up. "Robert "J" Donald Jr. If you don't wake up right now, I'll have your father box your ears right here and now." The boy jumped from the floor in freight knowing very well that what Mrs. Williams is saying might be true.

"Good Morning, Robert and I will tell you if I find you running in my forest after your bedtime. I will tell your daddy and boxing your ears will be the least of your worries." Boylen warned as she poured Mrs. Williams a cup of hot coffee. The smell of her made her stomach grumble in hungry and remind her that she would need to leave soon if she wanted to eat in peace without her clothing. Robert nodded as he hurriedly wrapped up Boylen's fleece blanket up into a roll. As Bo handed Mrs. Williams her cup of coffee the boy waved goodbye to her before running out the cabin and down towards his house. When the boy was out of sight Mrs. Williams turned towards Bo with exhaustion.

"Mrs. Williams. A Child. The town is getting more deprived every day." Bo exclaimed as she hurried from the room to the bedroom. She kept the door slightly open as she listened for Mrs. Williams response. She understood that a lot of people found her to be wrong even unnatural. She also understood to those who couldn't have her she was a mystery and a seduction. It was why men were so drawn to her but that was also why she was deadlier than a gun. She had twenty-five deaths underneath her belt. The number of them was the result of her unnatural ability.

"S-She was just worried about her son and after what happened with Conrad." Bo swallowed before reaching for the buttons on her shirt. "What happened to Conrad was the danger of men. who as you well enough know don't ever come up to the cabin!" Bo growled as she pulled her skirt up. She reached for her veil that laid across her dresser and then her gloves. When she turned towards the mirror she welcomed in her appearance of a black dress, veil, and gloves.

"Now, I'm going with you to town today. I need breakfast and a couple of things for the house. Mrs. Williams." She stated as she exited the bedroom. She was a work of beauty even if she was dressed in all black. Her pale skin the color of pearl grew paler against the midnight black of the cloth while deep purple of her eyes became even more apparent. It seemed to make them even glow even.