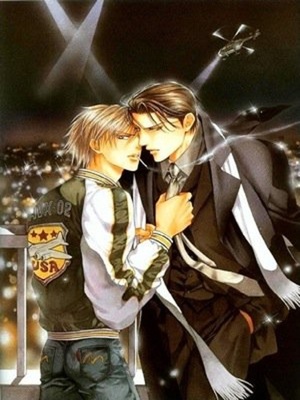 Candle In The Wind

It was two in the morning. While most of the city is asleep, a certain mafia boss was still wide awake, looking through documents.

With dark hair sleeked back and a focused frown, Asami Ryuichi looked every part of a successful businessman. Sitting at the very top of the Sion Empire at only thirty-five, he was a man that many envied. Despite his glamorous success, there was a dark shadow behind his perfect smile.

Anyone in the underworld of Tokyo, no, Japan... would know those cold and calculating golden eyes. He was not just an alpha amongst alphas. He was the most powerful man in Japan who controlled the financial world, political arena and underground world. If that wasn't enough, the man also happened to be an eligible bachelor. Omegas threw themselves at him left and right. Some beta and alphas do too but never once did Asami Ryuichi paid them any attention.

To him, they were like flies. Pesky but harmless. None of them piqued his interet. From a very young age, Asami was fixated on building his empire. Things like fated mates held no meaning for him. Who would willingly part with their lifespan for another stranger on the basis of love? That notion was simply ridiculous and Asami swore to never bond with anyone. Besides, the chances of fated mates were extremely rare. Most couples get married to another person without knowing who their fated mates were. Asami thought he would be the same too.

Two curt knocks broke Asami out of his concentration. "Come in," he said and put the documents aside as the door opened.

"Boss," Kirishima greeted. "We've caught the cat snooping around our turf. He is currently held in warehouse seven with Suoh, what do you want to do with him?"

Asami smirked. That pesky photographer was a rising star in the papers, bringing in amazing shots of corrupt politicians and small yakuza bosses. His accomplishments were respectable and Asami liked the young man's spirit. However, the young photographer by the name of T.A. had been probing too close to his territory so Asami instructed his men to capture the young criminal photojournalist and teach him a lesson.

The first time Suoh tried to catch the man, he'd escaped and Asami heard the most ridiculous story from his long-time head of security and friend. The young man had jumped off the fourth floor of a building just to escape his men. When Asami heard it, he felt his interest in the spitfire kitten grow. He'd met many brave men in his life but never one as reckless and daring as this. T.A. was someone Asami wanted to meet personally. It took the combined effort of both his best assistants to finally catch the young man. Asami glanced at the time. It was slightly early to be leaving but the club could run itself without Asami for a night.

"Bring the car over, we're going to visit him."

Kirishima bowed and excused himself while Asami stood up from his chair. He turned around to glance out of the window, taking a moment to appreciate the stunning city nightlights.

"T.A., what kind of man are you? Why do you interest me so much?" the kingpin smirked. He was going to see for himself what kind of cat T.A. will turn out to be.

Thank you for reading!

Don't forget to leave me a powerstone :D