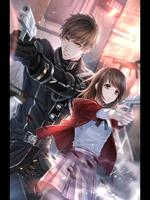 Chapter 1: And the story begins :

In an underground basement , the sound of screams could be heard clearly.

The place was enveloped with pitch black darkness, the only source of the light was the rays coming from the old, moving ventilator.

The place was filled with the stench of sweat, blood and dust.

“ Tell me, where is Agent J?” A well-built, highly refined, muscular guard asked in a cold, mechanical voice.

“ Not even if you kill me.” Agent K replied in a soft murmer. All no-thanks to the pain and torture, she has been through.

“ Just give up already. There is no way you can stop the attack from happening. Today is the end of This World. Earth will have an apocalypse today.Human civilization will end today. You can’t save it, anymore.” Amayra, The Leader of TTO spat the words.

“ Don’t forget, Miss Leader. There’s still 15 minutes left.” Agent S replied. Despite all the torture, all the pain, the arrogance, the dominance, the danger, the coldness couldn’t be hidden in his voice.

As if he would challenge her to the very doors of death itself.

“ Take them to the Four-Square and then hang them there. Let them watch the end of This Earth with their own eyes. Idiots.” Amayra gave the orders and then left the place, to accomplish her mission.

“ S, are you alright?” K asked in another soft whisper [ Telepathically]. Her energy was getting drained rapidly, all no-thanks to the bullets, which were still embedded in her body.

“ As if this ( referring to everything, they have been through) can affect me.” S replied haughtily. [ Telepathically]

And after a very long time, a small smile crept on K’s face. This arrogant, egoistic bastard is still the same.

“ 3 broken ribs, even the sternum has been cracked a little, 5 bullets still on the body out of 8. But luckily no fatal wound. Can still kick the hell out of others. Oh right, My left arm is delocalised too.” K reported her overall condition as a doctor.

“ Good. Now, listen carefully. There is a dagger in my jacket’s back,grab it and throw it at the man standing at 5 o’clock. He has Gullock with him, which will be useful for you.

We have to finish the mission, before they finish us. We can’t let that psychopath activate the Micro-lemments. It will destroy The Earth.” S replied, the superiority, the patriotism, the leadership, the will to protect this earth, this world could be clearly seen.

“ But, what about you?” K asked worriedly . Fine. Even in the name of humanity, she was worried about him. She had seen the bullet piercing through his heart.

“ Agent K, our priority is to save Earth and Earthlings, not you or me.” S scowl at her.

“ Let’s kill them all, before they do the honour. Don’t forget J and M are waiting for us. We have to stop this apocalypse from happening.” S stopped her from continuing further.

He knows, this idiot agent, is still the epitome of stupidity. Rather than saving herself, she is worried about him. Her sworn enemy.

“ Time to say goodbye to your favourite Earth, Agents.” The bodyguard from before replied haughtily.

And K, who till now was crouching on the ground, all drenched with her own blood and sweat, still coming in terms with the pain of the bullet,followed her senior’s order. She stretched her right arm straight, then bent it at 90degrees angle.

And with a little flip of her already a mess of body, she reached S’s back, brought out the dagger, threw it at the person, standing at 5 o’clock’s direction.

( After all, it was the stupidity to not to tie these agents up, when these idiots had the chance.)

And before any of the people could react she took three leapts, to cover the distance in between her and now dead person, she then sntached the Gullock from the gangster’s hand and shot at the bodyguard, who just hurt her left arm.

‘Boom’. And as if to be double sure, she shot another bullet to screw the brains of the guy.

And the guy as high and mighty as Mount Everest fell to the ground. But that wasn’t all.

There were 50 guards, 80 gangsters in the very same place. What’s more, her partner was heavily injured and so was she.

And only 7 Minutes to stop the apocalypse.

Can these two agentS ; Agent K and Agent S, stop the apocalypse from happening? Especially when both of them are injured as Hell.

Who is Agent J? Why does the Leader of TTO want him? Can he save these two agents and the apocalypse from happening?

Will the micro-lemments attack, which would lead to an apocalypse taking place? What is TTO? Who is this girl, Amayra? Why does she want to end the World?

How did she come in contact with this deadliest weapon of the Earth; The Micro-lemments?

Who are these two agents? What’s their relationship with each other? Why did he think, she thinks him as her sworn enemy? Are they really sworn enemies?

Millions of questions, but answer none.

In order to find out what happened, why it happened, and whether the World will end on the new year eve or not...

We have to go back in time. The time, when all of this started.

The time when the journey of this story started~~

Hello everyone, This is Author Silence.

A friend of mine has helped me, in advertising and publicizing my book, by mentioning it in her own book and platforms.

And currently she is partIcipating in WSA2021 with the book name MC, not again in web novel. So, please do support her book, vote her book with power stones and give her book lot's of reviews and continues,too. To help her get in the ranking,soon.

And I will give you all a mass release of 20 chapters soon. Please, do help her. As I am not good with words or publicity. So, this is the only method I could think of.