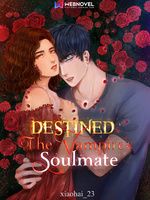 A human girl full of secrets, a vampire, and a city where both can live free.

When Julia appears at the city gates, she's tired and scared. All she asks for is shelter, and she's willing to accept anything to avoid going back to the hunters. She brings with her a secret that would cost her her life.

Leo is the one that senses her presence, and he doesn't like how all his instincts draw him to her. Yet, he can't resist it.
When his urges become invincible, he proposes a contract. In exchange for protection and safety, he wants her everything.

In a world where races are at war, two souls meet.
Can love bloom from a bond that was forced from fate? Can their feelings become genuine, even if determined by destiny?

I caress her arm, reaching her hand. I bring it to my mouth and prick her forefinger with my fang. When a single drop of blood spills out, I pass my tongue on it, healing the wound I made.
«Just as I thought,» I whisper. «Delicious.»
Julia opens her eyes but soon turns her gaze to the side, light blushing covering her cheeks. Her breath is heavy, but she tries to hide it. It's that excitement from before, that feeling of expectation for something that won't happen.
«But I won't bite. You can stop freezing every time. As you can see, I can control myself.»
«You don't have to,» she mumbles, and I almost grab her again.
Is she really this naive, or just stupid? But most importantly, does she say that every time someone aims at her blood?
«You shouldn't say these words to a vampire.»
«You're thirsty, and I am prey. I understand how you feel.»
«You don't understand a thing.»
«But I know that this is how things work. You need blood to survive, and I happen to have plenty.»
«I don't want your blood.»
She winces, and her smile falters. As if I've just offended her. Yet, she doesn't want to make me notice.
«Sorry for not being to your taste,» she shrugs.
What the hell? Ah, I just wanted to comfort her. Why is she pretending to be sad now?
I grab her shirt and push her against the wall. I don't use any strength; I don't want to hurt her. I just want her to notice my presence, to feel cornered. To realise that she shouldn't say words that she would regret later.
When she lifts her eyes to look at me, I kiss her lips with more strength than I have initially planned to.
Though she doesn't complain about that.