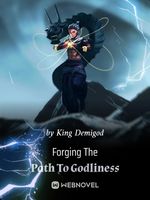 Forging The Path To Godliness

Chapter 1: The Cheat That Has Been Silent For Three Years

"Ye Feng, to this day, you've been here for three years."

"After three years, you cannot even forge the simplest Knight's Longsword, I think you should start considering a new path."

"You know about Avril's feelings towards you, but at the rate you're going, how will you take care of her in the future? Furthermore, you know the current situation, regarding her father…"

Saying so, the dwarf turned around and left, leaving Ye Feng all alone in the Blacksmith Shop.

Ye Feng rubbed his nose, showing a bitter smile on his face.

The person earlier was called Nyzo, one of the members of the small dwarf race and also the owner of this Blacksmith Shop, a famous Master Blacksmith of Osborne City.

Three years ago, it was Nyzo that brought him back to the Blacksmith Shop, preventing him from dying of illness in the streets.

For the last three years in the Blacksmith Shop, Ye Feng had been working hard to learn the art of forging techniques.

But even after three years, he did not succeed even once.

If not for Nyzo's kindness, he would have been chased out already.

For the last three years, he saw batches of students leaving the Blacksmith Shop.

Only he was the anomaly.

Nyzo had talked to Ye Feng many times, asking him to find a new path for himself. However, he could not overcome the combined force of Ye Feng's persistence and Avril's pleas.

Avril was the goddaughter of Nyzo, she was also the daughter of one of the three Advanced Knights of Osborne City, Eric. Because of Eric and Nyzo's friendship, he acknowledged Avril as his goddaughter.

From their interactions over these three years, Avril also developed some feelings for Ye Feng.

Shaking his head and tossing away his scattered thoughts, Ye Feng walked to the forge and held up the hammer at the side.

Soon, the sound of metals clashing could be heard from within the Blacksmith Shop.

Outside, Nyzo shook his head helplessly.

He did not want to chase Ye Feng away either, but…

If Ye Feng could create even a single most basic Knight's Longsword, it would have been fine.

But the reality was, Ye Feng did not even manage to forge a single Knight's Longsword.

Not only that, Ye Feng did not show any talent in cultivation either, he showed no signs of being able to become a knight or awaken the potential to use magic.

Such a person could only be an ordinary man in this life.

If he were to die one day, how could Ye Feng take over the entire Blacksmith Shop alone?

Rather than that, he might as well start making preparations to find ways for Ye Feng to survive on his own in the future.

Right after Nyzo made this decision, he decided that after getting the materials this time, he would find his old friend and try to arrange a simple job for Ye Feng.

It was a world with magic and knights, not only were there humans, there were also vampires, elves, dwarves, and other races.

Ye Feng was currently in Osborne City, a city at the fringe of the Tsama Empire of Marfa Continent.

Even though there was no war ongoing, the rules of the survival of the fittest still remained.

A person like Ye Feng without talent or skill had absolutely no status at all.

Even though Nyzo was around now, he could not protect Ye Feng forever.

In the Blacksmith Shop, Ye Feng's hammer was still pounding on the iron block that was glowing reddish black and had yet to take form.

The sweat from his forehead fell on the iron block, creating sizzling noises.

At this moment, Ye Feng's expression was filled with determination.

He had to succeed!

Right now, there was no alternative for him but to succeed!

"It has been three years, why, why can't I succeed even once? Even once!" Ye Feng was unrelenting.

He was a transmigrator, he had his cheat too.

But for the last three years, his cheat had been like a piece of trash, it stayed dormant in his mind, sometimes, Ye Feng even wondered if his cheat was non-existent.

It had activated three years ago when he first arrived, he originally thought that his future would be bright with this cheat system that he had, but to think that it went totally silent for three years.

It did not have any impact on Ye Feng's life whatsoever.

In fact, he could pretty much live without its existence, at least then, he could still look forward to something.

Wiping the sweat off his face and forgetting about the matter of his system, Ye Feng continued swinging his hammer on the iron block.

Now, he only wanted to change his current situation through hard work and diligence.

"Ding! Congratulations to the Host for failing to forge a thousand times, you have successfully activated the World Creator System." Suddenly, a clear voice resounded in Ye Feng's mind.

Hearing this, Ye Feng was first stunned before starting to feel extreme joy.

Failing to forge a thousand times?

That was the true way to awaken his system?

Thankfully, he did not give up and continued forging, otherwise, he would have never been able to activate this system.

He who worked hard would be rewarded. Was Ye Feng going to start rising to the peak of his life now?

At the next second, Ye Feng's smile froze on his face.

When he tried earlier to communicate with the World Creator System in his mind, it showed no response.

"Don't, don't tell me this is like three years ago, is it toying with me?" Ye Feng cursed in displeasure.

It seems that he could not count on his cheat system, he had to continue forging earnestly.

Thinking so, Ye Feng put away his disappointment and cast his gaze at the iron block again.

With a tinkling sound, the iron block was sent into the furnace to melt with the ore.

After thoroughly mixing together, Ye Feng poured the molten liquid metal back into the mold.

After it became cooler, he continued to forge using his hammer.

He did not know how much time had passed, but Ye Feng still struck with the hammer tirelessly, and the palm of his hand that was holding the hammer became wounded from friction, spilling a trace of blood.

After his tireless forging, the Knight's Longsword gradually took shape.

After the sword was heated again to create the hilt, a refined Knight's Longsword was forged.

Looking at the Knight's Longsword in his hand, Ye Feng could not help but reveal a smile.

Compared to his past failed works, this sword was much sharper and harder.

"I finally succeeded?" Ye Feng could not help but feel a sense of joy.

After three years, he had finally forged a passable Knight's Longsword.

Even though it was only the most basic Knight's Longsword, it bore a huge significance to Ye Feng.

"Ding! Congratulations to the Host for creating a stage one inferior-grade Knight's Longsword, you have obtained 10 fire elemental points." Suddenly, the clear voice from earlier resounded in Ye Feng's mind again.

As the voice faded away, Ye Feng could feel a new source of energy out of nowhere flowing along his veins and tendons, filling his entire body with energy.

Right now, Ye Feng felt like he had endless stamina, his body also felt lighter than before.

Ye Feng was extremely happy, he quickly looked towards the Knight's Longsword in his hands.

"I will get rewarded for forging new weapons? The system wants me to continue on the path of forging?" Feeling the strength in his body, Ye Feng could not help but mutter.

If he were to gain such a reward each time he succeeded in forging a weapon, would it still be a dream to become powerful?

And as his strength increased, the things that he could forge would become more advanced.

This was a virtuous cycle.

At this moment, Ye Feng saw a promising path ahead of him.

This affirmed his decision to stay in the Blacksmith Shop.

But the question now was, would he get a reward each time he succeeded in forging something?