/ Magical Realism / Goddess of thunder: Reborn in the RomCom universe 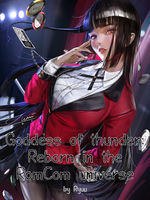 Goddess of thunder: Reborn in the RomCom universe GOTRRU

Jamabi Yumeko is now called in this life. This is her third life, in her first life she was known as the empress of thunder or the goddess of thunder with a harem of 1000 jade beauties of all kinds. In her second life, she became a woman of culture, and when her beloved's life is in danger, she decides to sacrifice herself to save her life. Now she has reborn in a strange anime world where she is a strange romcom combination. When her parents die in an accident, she decides to become a writer so as not to be separated from her sister, they live with her sister in a dormitory run by her aunt Sakuroso .....

* The cover is not mine
* netori may appear in the novel (the main character steals loved ones)
* 100% GL
* I will try my best to capture the characters of the characters from different anime, but I do not promise
other tag: Incest, Sis-con, Futunari