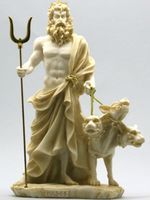 [ Guess what, I decided to rewrite the first chapter to something more I liked. Thanks to a comment I found a site where I can read the PJ books. Don't expect anything consistent with the lore of the books and there will be some changes seeing this might be an AU. I might not do the PJ stuff and just mess with the og myths. Adios]

"What happened?" questioned a soul in the void, silence is all that answers. The soul drifted aimlessly with nothing to do it slept.

That was until a rumble, the soul could not remember much of his past, his name, family, friends, and close ones were lost to him in time. He could remember some but not all, its death is one of the memories it retained.

Waking up due to the rumbling, the soul looked around and till it spotted a white light. "I die by a flying truck and now am getting sucked into a white hole, great."

The soul was dragged into the light, how could it resist the intense force of the light.

With a chuckle as it approached the light revealed to be a hole in the endless darkness. "A hole is a hole." With those words, it was absorbed into the light.

" Push lady Rhea, the babe is almost here." Called out a midwife.

" I am trying the rascal is putting up a fight." The Titaness known as Rhea replied she had decided to carry her children for as long as possible due to her husband Kronos swallowing their children.

" I am sorry, mother couldn't protect you, my boy, forgive me."

' Turns out I was in a womb, I know I know, didn't figure it out till I heard someone talk to me and realizing my form was that of a baby.'

'It was enjoyable being in this place, it was warm, and I felt my mother's kindness. My time of birth came about sooner than expected.'

" Hahahahahaha am free world," I shouted with glee but what came out was babble. A kind lady turned me over to a beautiful woman who was my mother. She looked at me with kindness and said words that I wouldn't figure their meaning till later.

She took out her breast to feed me, and why would I reject, she was my mother, and it was food.

We spent the day together in peace and it was one of my happy days.

That day was ruined when my dear old dad came knocking.

" It is time, hand over the babe," a strict voice commented. A man with broad shoulders with dark hair that draped below his nape. He was handsome with olive skin and dark onyx eyes.

"No, please one more day." A woman with golden hair and green eyes that held kindness radiated sadness, anger, and despair. She was a fair woman any man would fall for.

" We agreed to one day now hand the babe over or I shall take him myself" The man returned with a cold voice.

Seeing she could do nothing, she took up her child, kissing his forehead and wrapping him with fine clothing she handed him off. Not willing to look at the fate of her fourth born and first son.

The man swallowed the baby but not with difficulty. Not a week old and the young god gave his father a rough trip with his throat burning.

Looking at her husband she walked off, not willing to be with him a second longer.