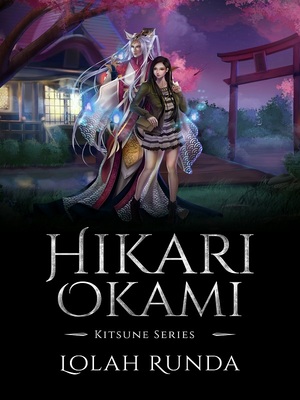 The dark skies above the yoshiwara district were alight by the bright celestial lamps surrounding the place. From the inn, voices and music playing could be heard as yokai patrons seemed to be enjoying the company of their companion.

The kurokumo "dark cloud" inn, was well known among the yokai as an establishment which catered to the unique needs of all who went there.

The Kaze no Yuki "faded purity" who have been trained from an early season to bring great pleasure to anyone who pays homage to the kurokumo inn. Among whom, was Hikari, who seemed to be well known for his frequent visits to the place.

The upper level of the inn was reserved for those of noble birth who were given the privilege of having their very own Kaze no Yuki attend to their needs, among them, was one whose beauty was highly spoken of. As a result of this, she became the companion of Hikari, she was known by the name, Kayo.

In one of the rooms was a kitsune, with pointed ears sticking out from long, platinum lavender-blue hair, with matching eyes of dark piercing pupils.

He had razor-sharp claws that seemed to extend from slim well-tended hands, dressed in a pink and gray flowery pattern kimono with feet clad in a geta "wooden slippers". Hidden within layers of kimono was a specially made sensu "hand fan".

The kitsune seemed to be lying on a well-made, multicolor futon that was laid over the tatami "wooden floor" while sipping sake from a sakazuki "wine cup".

His eyes lazily followed the movement of his companion, watching her head slightly bent while playing on the koto with her fingertips dancing all over the strings; causing the room to become alive with notes which seemed to emanate from the instrument.

Brief overview of the life inside the world of the yokai elite.